DRUGS Phase 3 is the largest research project ever undertaken looking into whether combinations of pre-existing drugs might be better at treating specific forms of cancer.

By harnessing the collective computing power of tens of thousands of smartphones being charged overnight, Imperial College researchers have been able to trawl through masses of scientific data looking for the best drug combinations.

This builds upon the first two phases of DRUGS which examined the anti-cancer potential of single drugs and foods respectively.

These previous phases have already led to promising new discoveries: hundreds of anti-cancer molecules exist in everyday foods such as oranges, cabbages and grapes, for example, and two existing drugs designed for treating other conditions also have anti-cancer properties.

Researchers at Imperial College London now have to analyse all the Phase 3 results in detail.

The power of DreamLab

Phase 4, which is the current DRUGS project in DreamLab, goes down a different branch of research. Building upon Phase 2, it examines whether combinations of molecules from multiple types of food could be more effective as treatments rather than single foods alone.

These two strands of research into the anti-cancer potential of pre-existing drugs for other conditions and food molecules will eventually come together in Phase 5. 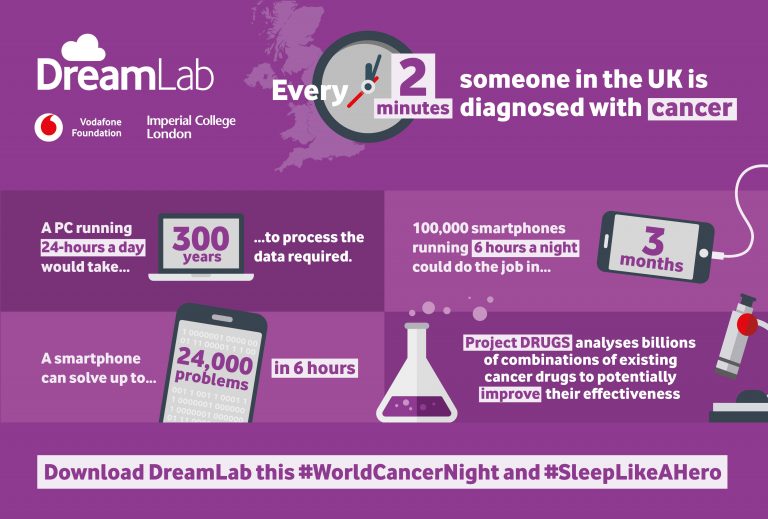 Not yet started, this will investigate whether combining drugs and food molecules together can be used to treat cancer. As far as the researchers at Imperial College are aware, no one else has attempted such research on a scale as large as Phase 5.

But to get there, Phase 4 has to be completed first. Every night, thousands of people plug in their smartphones and fire up the DreamLab mobile app from the Vodafone Foundation.

These smartphones, by working together, can crunch volumes of scientific data in far less time than it would take a desktop PC, thereby speeding up the search for new cancer treatments.

DRUGS isn’t the only active research project being crunched by DreamLab. The app’s Corona-AI project is investigating whether foods and drugs for other conditions could be used to treat COVID-19, the disease caused by the novel coronavirus.

We’re just three months into the project, but here’s what DreamLab users have achieved…

If you want to contribute to either of these pioneering research projects, download the DreamLab app from the App Store for iOS or Play Store for Android.

Vodafone customers can activate DreamLab for free using either mobile data or Wi-Fi. Those on other networks will be asked how much data they would like to donate to power the app, or can connect via Wi-Fi.

By using DreamLab every night, every one of us can help make a difference.

How you can help fight Covid-19 using your smartphone

World Cancer Day: How our DreamLab app is helping in the fight

By the people, for the people: DreamLab app downloaded 100,000 times