News Centre Home Smart Living Everything you need to know

Smart Living | Everything you need to know

Everything you need to know |

How to ‘cast’ music wirelessly from your smartphone to your wireless speakers and TV, no matter what set-up you have in your home.

Listening to music on your smartphone through your living room speakers used to be as simple as connecting a 3.5mm audio cable between the two and hitting play. It’s a little more complicated now.

We’re not only streaming music rather than buying MP3s, we’re also more likely to have wireless speakers and smart speakers, or rely on the speakers built into our TVs. Plus, increasing numbers of smartphones no longer even have a 3.5mm audio jack.

Given the many competing ways for playing music on wireless speakers, you’d be forgiven for thinking that you can only do so if phone and speaker are made by the same manufacturer. That’s not true. Ensuring your phone, music streaming service and wireless speakers are all singing off the same hymn sheet is far easier than it first appears.

Here’s a breakdown of each method.

To use Bluetooth, you’ll have to pair your speaker with your phone using the Bluetooth section of your phone’s Settings app. The exact steps will vary depending on your speaker, so you should check the documentation that came with it. The speaker may require you to type a security code into your phone’s Bluetooth settings, for example.

Despite its ubiquity, Bluetooth has some limitations which may push you towards the other WiFi-based methods detailed below. Bluetooth has a range of around 10m, so playback is likely to stop even if you wander just a short distance away from your speaker. Jarringly, Bluetooth connections also transmit every sound from your phone to your speaker, not just your music, from notification pings to keyboard taps.

Bluetooth connections can sometimes degrade audio quality, especially on phones with older versions of the standard. To ensure you get the best possible audio quality, Android users should ensure that both their phone and Bluetooth speaker supports the aptX technology, while iOS users should look for AAC compatibility. Put very simply, both aptX and AAC help improve audio quality over Bluetooth.

Finally, using Bluetooth can deplete your battery more quickly as your phone will be constantly sending data to your wireless speaker.

AirPlay is best known as Apple’s method for connecting iPhones and iPads with wireless speakers over WiFi. AirPlay is more flexible than it first appears though, as you can also use it to transmit audio from Macs and from the Windows version of iTunes. You can then enjoy your audio on TV set-top boxes such as the Apple TV 4K (which is available as an optional extra for Pro Broadband customers) and models from Roku, wireless speakers from numerous brands including Denon and Sonos, and even recent smart TVs from Samsung, Sony and LG.

AirPlay has some useful advanced features, such as the ability to have the same audio playing on multiple sets of speakers simultaneously. Or, alternatively, to have something different playing on each speaker set.

AirPlay won’t suit everyone, especially if you use Android where it’s not officially supported. Otherwise, it could be what you’re after. To get started, follow Apple’s instructions.

Alexa Cast is a little-known feature of Amazon Music, a music streaming service which itself is a lesser-known alternative to Spotify and Apple Music. Using Alexa Cast, you can play audio from Amazon Music on your iOS or Android device and hear it on Amazon Echo speakers as well as Alexa Cast-compatible speakers from brands such as Yamaha.

Amazon Prime Music is the basic tier of Amazon Music and is included with Amazon Prime. Vodafone UK Pay Monthly mobile customers can add Amazon Prime to their plans for a low monthly fee. To learn how to set up and use Alexa Cast, follow Amazon’s instructions.

Google Cast is best known for enabling Android devices to play video wirelessly on TVs equipped with a Chromecast streaming stick, but it can also be used for audio, too. Google’s ‘casting’ tech isn’t restricted to Android though; it’s also available in numerous iOS apps (with the notable exceptions of Apple’s Music and Podcast apps). You’re not restricted to casting to Chromecast sticks either; the necessary tech is also built in to recent WiFi-connected speakers and TVs from household names such as Bang & Olufsen and Sony.

Sonos pioneered wireless speakers. While many of its recent speakers support Bluetooth, AirPlay and Spotify Connect, Sonos also has its own system. You can give the Sonos app permission to access your streaming services (as well as any music stored locally on your iOS, Android, macOS or Windows device). You can then control the playback of everything from just one app. To set this up, follow Sonos’ instructions.

Spotify Connect is the most convenient technology you’re probably already using without even realising it. As its names suggests, Spotify Connect is the service’s own version of Google Cast. Using it, you can listen to your Spotify music and podcasts on your speakers or TV while controlling playback from your phone (or your tablet or computer) with minimal effect on its battery life. 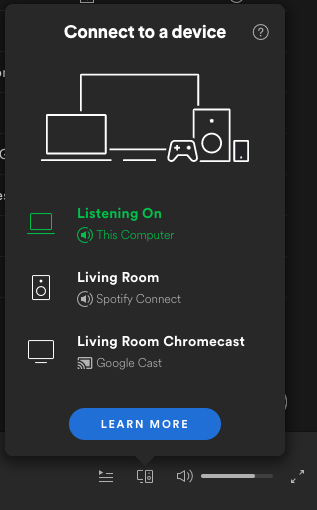 The huge number of Spotify Connect-compatible devices include the Apple TV 4K, Amazon Echo speakers, Chromecast sticks, Sonos speakers and Google smart speakers, to name just a handful. If you use Spotify as your sole source of audio entertainment, Spotify Connect could be all you need. To use it, follow Spotify’s instructions.