Love is in the air, but you don’t have to settle for the same old rom-coms with our romance-themed guide to the best streaming movies and TV shows.

Valentine’s Day is like Marmite – you either love it or you hate it. If you can’t stand 14 February and all things Cupid-related, then the pervasiveness of romantic comedies and dramas – especially during February – can be especially irksome.

It doesn’t have to be that way though. With our guide to some of the best yet unconventional romance-themed TV shows and movies on Amazon Prime Video, you can avoid the usual clutch of predictably twee rom-coms and sentimentally saccharine screenplays.

Best of all, Vodafone UK Pay Monthly customers can add Amazon Prime Video to their plans for a low monthly fee.

Much of the humour in this sharply written series comes from the two leads’ messily dysfunctional personalities as they attempt to make the most of their inadvertent bonding. Keep an eye out for guest appearances from the late, great Carrie Fisher.

Carol is a period romantic drama with a difference, following the tentative then tumultuous courtship between two women – Carol and Therese – in 1950s New York. Unlike many other mainstream LGBT romance films though, Carol focuses just as much on the relationship itself as it does on the two lovers overcoming hostility from those around them. The heart-pounding weight of affection and longing is elegantly conveyed through the poised yet emotive performances of stars Cate Blanchett and Rooney Mara.

The emotion conveyed is matched by the technical excellence of the sumptuous costuming and deft cinematography which evokes the 1950s without descending into mimicry.

Shakespeare’s timeless romantic tragedy needs no introduction. Adaptations of the Bard’s plays sometimes struggle to maintain their own identity against Shakespeare’s poetic prose, but that’s hardly a problem for Baz Luhrmann’s seminal film. 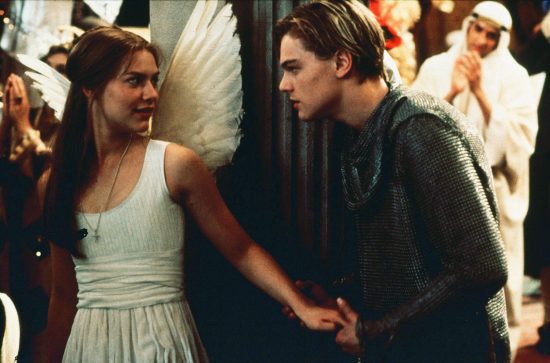 Energetically and cleverly adapted to a modern day setting, the film’s vivacious style has been much imitated but rarely matched. This is due in no small part to the cast’s convincing portrayals of heady joy and anguished grief.

From one literary adaptation to another, Clueless is both a delicious slice of the Nineties preserved in celluloid aspic and a surprisingly charming update of Jane Austen’s Emma.

While only a loose adaptation of the novel, its spirit is evident in the film’s surprisingly witty dialogue as our chirpy heroine slowly realises she isn’t quite as adept at matchmaking and relationships as she thinks she is.

A biopic about Marie Curie, the Nobel Prize-winning discoverer of radioactivity, might appear to be an incongruous selection for this romantic pick ‘n’ mix. But Curie’s life was defined just as much by her love for her husband, daughter and fellow scientists Pierre and Irene, as it was by her pioneering physics research.

While Radioactive plays fast and loose with the historical truth in one too many places, this film is nonetheless worth a watch due almost entirely to Rosamund Pike’s masterful performance as Curie.

While James Buchanan was the last US President to serve out his term in office as a bachelor way back in 1861, portrayals of a singleton Commander-in-Chief nonetheless periodically emerge from the Hollywood studios.

This Nineties effort is by far the best of the bunch, following Oval Office occupant Michael Douglas as he woos a principled lobbyist played by Annette Benning. You may get an odd sensation of déjà vu while lapping up the witty, rapid-fire banter. The film’s scribe Aaron Sorkin later revisited the halls of power in cult TV series The West Wing, which features not only the same writerly flourishes as the film but some of the same cast, too.

Many couples must gingerly grapple with their thorny in-laws, a problem given the comedy treatment in this smash hit film. Middle class American professor Rachel not only discovers that the mother of her would-be fiancé despises her, but that their family are part of Singapore’s monocled upper crust.

While Crazy Rich Asians is very much an escapist rom-com with its fabulous outfits and gilded mansions, it stands apart from its peers with its classy performances and acknowledgement of the class-based awkwardness that bedevils some relationships. Surprisingly, at the time of its cinematic release in 2018, it was the first Hollywood film in decades to have a predominantly Asian cast.

The Last Man on Earth

If Catastrophe’s awkwardly dysfunctional lovers has whetted your appetite for more off-kilter romance, then this TV series from 2015 might be for you. The post-apocalyptic setting of a world ravaged by a virus won’t be for everyone, given current events. But this scenario is played for laughs as Carol marries social misfit Philip, even though she doesn’t even like him, as they believe they’re the last humans alive and must therefore re-populate the planet.

The darkly comic drama soon escalates as a handful of other survivors enter the lives of Carol and Philip, fitfully starting haphazard relationships of their own. Finding love and laughter in the face of a pandemic seems entirely fitting to us.