A scrum of advanced technologies, from AR to motion capture, feature in the official British and Irish Lions app from Vodafone – we explain how they work.

The British and Irish Lions 2021 tour of South Africa seems a long way off, but rugby fans can already immerse themselves in the upcoming tournament in a unique way. The team’s official app, brought to you by Vodafone UK, includes the Digital Lions feature which you can use to create a fully animated virtual 3D avatar bearing your likeness.

Creating and customising your own Digital Lion avatar is so simple that it takes mere minutes, but the technologies underlying them are cutting-edge and were brought together through months of work. Here’s how they work together to help create the Digital Lion fan experience.

The app takes a selfie shot of your face, but it doesn’t merely copy and paste that photo of your face onto your 3D avatar. An algorithm, created by specialist firm Wolf3D and trained on 3D scans of over 10,000 different faces, recognises your key facial features, the distance between them and the shape of your face.

From your selfie, the algorithm creates a mathematical representation of your face. Unity, a 3D graphics engine also used in popular games such as Pokemon Go, uses it to recreate your face in convincing 3D graphical form. You then have the option of customising its appearance, either to match your own look or to express yourself creatively, from hairstyle to glasses. Once your avatar is created, the mathematical representation of your face is deleted.

One aspect of your avatar that won’t be accurate, unless you’re as well-honed and muscular as a professional rugby player, is its body. It not only has a Herculean physique, it moves in a realistically convincing manner, too.

This is because the avatar’s movements have been motion captured from those of Lions legends Sam Warburton, Paul O’Connell, Ian McGeechan and Jeremy Guscott. Each player wore suits dotted with sensors that, like the motion capture technology used in Hollywood movies, accurately tracked and recorded the movements of the Lions legends.

To capture the fast-paced movements of the players smoothly, realistically and with a sense of balance, each sensor – or inertial motion unit as they’re called – tracked acceleration, velocity and inertia. Not just of each body part individually, but in relation to each other – such as the avatar’s hands when passing a ball as the torso is twisting at the waist while the legs are in motion.

Even so, motion capturing the movements of a full-contact sport posed some challenges as Dan Cheetam, creative technology specialist from Happy Finish, explained.

“In pre-Covid times we would have motion captured Paul O’Connell and Sam Warburton actually tacking and lifting each other as in a line out,” says Dan.

“But due to social distancing constraints, we needed to find work-around solutions, such as using tackle bags and then manually fine-tuning the recorded movements afterwards.”

Your completed Digital Lion avatar doesn’t live in isolation. Using your smartphone, you can view your avatar superimposed over your rear camera’s view of your surroundings. This is called augmented reality (AR), as opposed to virtual reality where everything you see is computer generated.

So your animated avatar appears to be standing, running and celebrating in your living room, garden or wherever you happen to be. You can even shrink your Digital Lion down to the size of an action figure or enlarge it to ceiling-scraping proportions. 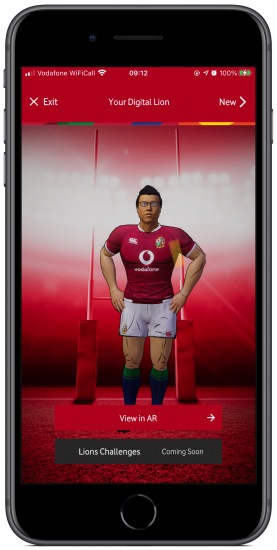 Augmented reality is far more complex than it appears to be as your phone has to track your Digital Lion avatar in relation to real world objects around it, including yourself. Rather than reinventing the wheel, the app uses software from Apple and Google specifically designed to enable apps to do this – ARKit in iOS and ARCore in Android.

It’s worth bearing in mind that the strenuous processing demands of AR and 3D graphics mean that the Digital Lions feature won’t be available on all phones, such as older and cheaper models with less powerful processors and older, less capable versions of the operating system. For iOS, you need an iPhone 6s or later (iPads aren’t currently supported). For Android, check Google’s list of ARCore-certified devices.

The combined result of these face scanning, motion capture, 3D graphics and AR technologies is a fun and seamless experience for Lions fans. There’s more to come, too, such as the ability to play in-app games using your Digital Lion avatar and the ability to pose with ex-Lions players in AR.

To download the official British and Irish Lions app, head to the App Store or Google Play.