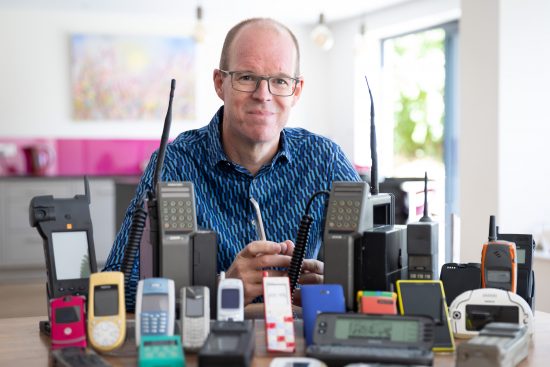 The museum has more than 2,000 unique handsets from 200 different manufacturers charting the evolution of mobile phones from 1984 to the present day, but the curators are still hunting for rare and iconic devices.

Vodafone has announced its five-year sponsorship of the Mobile Phone Museum, an online museum launching in November 2021, dedicated to showcasing a complete history of mobile phone handsets to celebrate and safeguard key devices from the last 35 years and inspire the next generation of engineers and designers.

The idea for the museum was born in 2004. But it was in 2019, when creator Ben Wood joined forces with fellow mobile industry veteran Matt Chatterley, that the vision started to gather real pace, with the co-founders leveraging their industry connections to add rare and iconic devices to the collection.

Today, the Mobile Phone Museum has more than 2,000 individual devices from the dawn of the mobile era to the present day. It is a fascinating journey of mobile phone technology through the ages – from the very first “portable” handsets to the latest smartphone models. The museum will launch online in November, with pop-up physical exhibitions planned in future to ensure the museum reaches as many people as possible.

Founder Ben Wood (who is also Chief Analyst at technology research firm CCS Insight), said: “I’ve been collecting phones for more than 25 years. Over the last three decades the mobile phone has become part of the fabric of society and the design diversity, from early transportable phones to the latest smartphones with flexible displays, is something to behold.

“When the online museum launches later this year, we want it to be a rich learning resource and a way to inspire young people to go on to create incredible mobile innovations of their own in the future. We are delighted to welcome Vodafone as our first major sponsor to help bring the museum to a wider audience and ensure that more people have the chance to be amazed and inspired by these devices and the fascinating history of mobile communications.”

Max Taylor, UK Consumer Director, Vodafone, said: “More than 35 years ago, Vodafone made the UK’s first mobile phone call on the Vodafone Transportable VT1, a handset which was the size of a car battery and weighed even more.

“Looking back at those early devices and everything which came later tells a fascinating story, not only of the technology itself and how it has evolved, but also of how we communicate.

“Our smartphones are now at the very centre of our world, and this is a fitting celebration of the role they play. We hope that by supporting Ben and Matt’s unique museum collection – the most comprehensive collection anywhere in the world – we’ll be able to help people reminisce about the devices they’ve had over the years, and get excited about what devices might be able to do for them in the future.”

Vodafone recently reaffirmed its position as the best place for the latest smartphones with the launch of Vodafone EVO, an innovative new offering which enables customers to get the handset they want at the price they choose – including the new iPhone 13 series.

About the Mobile Phone Museum

The Mobile Phone Museum is a charitable company created to safeguard key mobile phones and related devices from the last 35 years, as well as develop an education programme to raise awareness of how mobile phones have evolved. It currently comprises over 2,000 unique devices from 200 manufacturers charting the evolution of mobile phones from 1984 to present day.

It is uniquely positioned as a leading repository for key devices, recording their history via the extensive network of contacts its founders have throughout the mobile phone industry.

Initially the project will launch as an online showcase, but in future the team hopes to work with a leading museum and other sponsors to curate pop-up exhibits of its devices.

More details about the project and the forthcoming launch can be found at www.mobilephonemuseum.com.