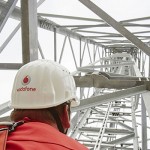 At Vodafone, we want nothing more than for people to love using our network. We want customers to be confident in using it wherever they go, to never experience call drops, and to have fast data there in their pocket whenever they want to use it.

To that end, our network is now officially the biggest and best it’s ever been – with over 5,000 mobile sites 4G-enabled in the last year alone, providing 96% 4G UK population coverage – but we know that it only matters to our customers when they hardly notice it: mobile signal is at its best when its working quietly in the background of their daily lives, after all.

Connect magazine and P3, one of the world’s leading independent mobile network testing companies, recently reported we are the best for voice performance nationwide which means we are connecting calls quicker and with greater reliability than any other provider. We’ve also been named joint first for our overall network across the UK and the number one network in London for the second year in a row. You can find out more here.

But we’re always looking to improve our network in a number of different ways. Our first and highest priority? Pushing ahead with ‘Project Beacon’.

Out with the old, in with the new

Project Beacon is a full upgrade of our entire network, replacing old 2G and 3G equipment on masts with fully modernised 2G, 3G and 4G technology, which completely changes the customer experience when it comes to voice and data usage. At the same time we’re also modernising the antennas and power systems and, at some sites, bringing in a high capacity fibre or microwave backhaul of up to 1GBps, to really future-proof our customers’ data speeds.

When we bring new technology to each site we actually bring new spectrum too. We started our 4G roll out installing 800MHz spectrum at our sites, which gives us really good coverage indoor and out. However, on a lot of these sites we have also deployed our new 3G 900MHz and 2100MHz spectrum – the 900MHz in particular brings a more robust voice experience for our customers.

We’re not forgetting about rural communities though, for whom we know mobile coverage can be a big issue. Our Rural Open Sure Signal programme has brought 3G coverage to 84 rural communities from the Shetlands to Cornwall.  We’ve also launched our new Community Indoor Sure Signal initiative which is doing the same for community hubs, such as village stores and pubs.

As with any network upgrades there are a number of challenges in providing our customers with the best possible mobile network. The first, and arguably the biggest, is around site acquisition – that’s agreeing with landlords or site operators about what we want to do, and then getting the right access to do it. The second part of that is bringing the backhaul (the technology which connects masts to our core network) into the sites, which can take many, many months to do.

To help keep things smooth while that happens, we do a lot of preparatory work to make sure that the downtime of each base station (a mast and its associated equipment) is kept to a minimum – particularly in smaller towns and villages, where there is often only one site in the area to minimise the impact for our customers.

Another challenge is in the performance optimisation of the network. Once we’ve acquired a site and brought in new transmission technology – or built a new site – we need to optimise it so that it works seamlessly with all other sites in the area. A huge amount of time and work goes into that. We’ve got teams all over the country whose job is to take care of all the planning, design and optimisation of the radio equipment, but it’s a never-ending task because each time we bring a new base station live it changes the environment surrounding it.

The reason for that is simple. Wherever you have a cluster of old sites and you bring a new Beacon site live, it changes or affects everything around it. You then have to optimise all the legacy base stations nearby, and, as you change or upgrade each one, it’ll alter both the other old sites and the beacon one you’ve just upgraded.

As a result, we constantly have to monitor each and every cell, change the orientation of the antennas, alter their power outputs and shift the parameters which help people’s phones move effectively from site to site.

But, as the P3 results highlight, all that hard work is paying off. We’re now carrying two thirds of our voice traffic nationwide on our 3G network, which is more robust than 2G, and in the cities that number hits around 90 per cent. Likewise, more than two thirds of our data traffic is carried on 4G, not 3G, which is providing higher speeds for everyone.

As it stands, we now have over 90 per cent population coverage. The aim for the programme is that we upgrade around 400 new base stations every month, and we’re aiming to be complete the work in December 2017.

And with that being the case, we’re now starting to look at what we can do after Project Beacon is complete. Moving forwards, we can add even more capacity to our sites, either with new spectrum or advanced features and techniques MIMO; roll out more and more small cells which can bring coverage where there is none; and really start to get excited about 5G.

Ultimately, it’s very important for us that we’ve got people covered wherever they are. Things may not always move as quickly as everybody would like, but we’re working very hard and investing billions to make the Vodafone network the very best it can be.