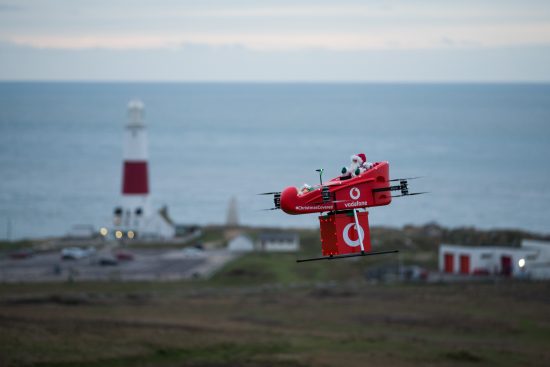 Vodafone has completed the first ever UK drone delivery over a 4G mobile network.  Drones are traditionally flown using a radio link, with the drone in sight of the operator.  However, controlling drones using the 4G network means they can be monitored in real time, reducing the need for drones to be flown in line of sight.  Vodafone was able to complete the delivery due to the strength of its 4G network, which covers 99% of the UK population.

The drone is the first of its kind to be built and flown in the UK and harnesses the power of Vodafone’s network via a portable 4G router.  In the future, drone delivery over a mobile network could be used to drop vital supplies into hard to reach places.  The low latency of 5G will also open up new opportunities for using drones in more densely populated areas.  5G technology will make the drones more responsive, which is essential for avoiding buildings and other obstructions in built-up areas.

The specially adapted drone was made to look like a twinkling Santa sleigh and carried festive treats. It brought Christmas cheer to Portland Bill Coastwatch, which sits on one of the most southerly points of the UK and operates 365 days a year.  It is manned by 75 volunteers, known as Watch Keepers, who are the eyes and the ears of the coast.   The Watch Keepers complete over 9,500 hours of service each year and work closely with the emergency services to help save lives. Entirely exposed to the UK coast, the site can be hard to reach in winter months.  However, using Vodafone’s best ever 4G network, a delivery of much-needed mince pies, chocolate and gingerbread men was delivered to the hardworking volunteers.

Scott Petty, Chief Technology Officer, Vodafone UK said: “Technology plays an increasingly important role in connecting people over Christmas.  Flying a drone over 4G for the first time gives us a glimpse of what Christmas deliveries of the future might look like.  We have been   working hard to build a network that now covers 99% of the UK population, and I’m really pleased we’ve been able to use it to support our rural communities this festive season.”

You can watch the full video here.

*We have our most reliable network ever. Our 4G network now covers 99% of the UK population.  For full verification see www.vodafone.co.uk/network.  You can also check out our current and planned coverage at www.vodafone.co.uk/our-network-and-coverage/uk-coverage-map/index.htm

Technical detail about the drone