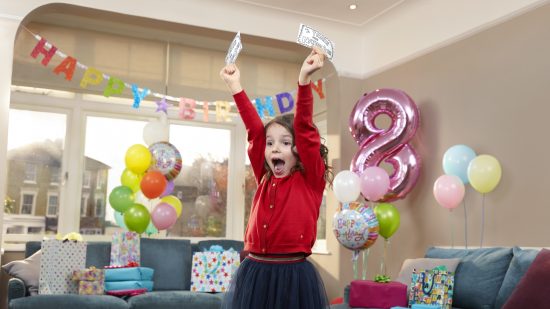 The 40 second ad highlights the strength of Vodafone’s UK network whilst demonstrating that some calls are too important to drop.

In its latest TV ad campaign, set to air tonight during Coronation Street on ITV at 2045, Vodafone is celebrating being named the UK’s #1 network for voice and London’s #1 network by P3 Connect.  The 40 second ad highlights the strength of Vodafone’s UK network whilst demonstrating that some calls are too important to drop.

The ad centres around Amy’s 8th birthday present: tickets to see her favourite popstar, Nathan Sykes, in concert.  As Amy celebrates the rest of the family realise the tickets are yet to be purchased as they actually go on sale the next day.  From 6am the next day, her uncle (one of Vodafone’s star leads) stays connected to the automated ticket hotline while he is at home, commuting on the bus and at work – all with 5 bars of coverage and a call that never drops.  When his turn comes he’s asleep after a long day in the queue: luckily his girlfriend comes to the rescue and is able to order the tickets for Amy.

Bilge Ciftci, Head of Brand at Vodafone UK, said: “This ad brilliantly captures why we’ve been working hard every day to make our network even bigger and better.  We know how important is it for our customers to get connected and more importantly stay connected when and where they need it.  We’re so proud to have been awarded the UK’s #1 network for voice and London’s #1 network by P3 Connect we wanted to shout about it.”

The advert is available to watch now on YouTube and UK TV and was created and developed by Ogilvy & Mather London and features the tracks ‘I feel free’ by Cream and ‘Over and Over’ by Nathan Sykes.

Eve Ashwell at The Assembly Rooms