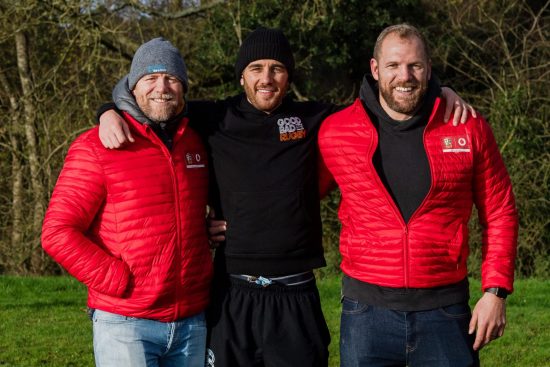 The event will offer a day of entertainment, education and fundraising to support grassroots rugby.

Bannockburn RFC is one of four clubs – alongside Westbury RFC, Dungannon RFC and Aberdare RFC – taking part in the Vodafone initiative, dedicated to supporting grassroots rugby clubs in the UK and Ireland. The club has been selected due to its role in offering training to armed forces veterans by helping them to remain active and to take an increased interest in rugby through free training sessions hosted by the club.

James Haskell: ‘Our mission to revive grassroots rugby and get kids fit again’

We caught up with the rugby star between dates on the Lions Legacy Tour of local rugby clubs to chat about how to boost enthusiasm for the game.
Find out more

As lead partner for the 2021 British & Irish Lions Tour to South Africa, Vodafone will bring a fun-filled day of sport to Bannockburn, including matches, a charity auction, pitch-side games and entertainment. Vodafone’s Lions Legacy Tour aims to raise awareness of the positive impact that grassroots rugby has on the local community and help raise much-needed funds for the clubs it visits, following the many challenges faced during the pandemic.

Vodafone’s Lions Legacy programme will also provide new technology to each club to help in its development. Bannockburn RFC will receive a MacBook, a new PA system and video projection equipment offering the club a chance to improve its matchday experience, and assisting in the review and analysis of training and matchday footage, improving future performance.

On the day itself, a selection of Bannockburn RFC members will be invited to attend digital workshops led by the team behind The Good, The Bad & The Rugby podcast. These sessions will provide Bannockburn RFC with the very latest digital knowledge and digital skills.

Vodafone Consumer Director, Max Taylor, said: “We’re looking forward to bringing Vodafone’s Lions Legacy Tour to Bannockburn and continuing our support for grassroots and community rugby. We hope that Vodafone’s help will provide the club with the digital training and financial assistance they need to solidify plans for future growth as they continue to recover from the pandemic.”

Ian McEwan, Bannockburn RFC President, said: “We’re really excited to welcome Vodafone’s Lions Legacy tour to Bannockburn, for what promises to be a landmark moment in the club’s recent history. We’re delighted that Vodafone will be sharing its knowledge and assisting the club in developing the digital skills needed to progress. The funds raised will help to guarantee our financial stability, and allow us to begin planning for the future.”

James Haskell, Mike Tindall and Alex Payne of The Good, The Bad & The Rugby podcast will join in with the day’s events to help raise awareness of the community spirit and importance of grassroots rugby. They will finish the day by hosting a live podcast recording of The Good, The Bad & The Rugby, inside the Bannockburn RFC clubhouse, guest starring Tommy Seymour and Lisa Martin.

To support grassroots rugby further, Vodafone is developing a resource for all community clubs across the UK and Ireland available via V-Hub, a platform to help small businesses develop their digital capabilities following the COVID-19 pandemic. Available from Spring 2022, the toolkit will offer essential tips and guidance and help clubs develop new skills and expertise in digital marketing and social media.

Vodafone’s Lions Legacy Tour is free to attend from 10am on Saturday 5 March 2022. The live podcast recording and evening entertainment is available to ticket holders only. For more information on the event please visit Bannockburn RFC social media platforms including Instagram, Facebook and Twitter.

Highlights from the tour so far can be viewed here and here.

Vodafone was Lead Partner of The British & Irish Lions for the 2021 Tour of South Africa. United by a shared passion for connecting people – both to each other and the things they love – Vodafone and the Lions worked together to make 2021 the most connected Tour in history.