VODAFONE UNVEILS NEW CHRISTMAS 2015 ADVERTISING CAMPAIGN, ASKS WHETHER TURKEYS COULD BE FOR LIFE, NOT JUST FOR CHRISTMAS 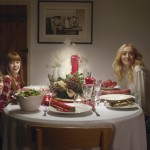 Vodafone UK’s 2015 Christmas advert has arrived, available to watch now on YouTube and set to air for the first time on British TV from tomorrow, Thursday 26 November.

The heart-warming advert follows the adventures of a modern family who have recently moved away from their urban life to set up in the countryside. Embracing their new lifestyle and getting back to nature, the family decides to raise a turkey – affectionately named Terry – in the run up to Christmas.

Throughout the ad, the family is seen using their tech devices to have fun with Terry: getting video tips on how to build him a turkey coop in the garden; and even sharing pictures of themselves with their poultry pal via social media. However, as December 25th approaches, it appears as though Dad is planning to use Terry as the star of the family’s Christmas meal.

As Dad carries Terry off into the family’s shed ahead of the big day, we expect the worst – but when we enter the final scene, it is revealed that Terry is sitting pride of place at the family dinner table on Christmas day – as one of the family, while a glorious nut roast and all the trimmings are laid out for all to enjoy!

Out now on YouTube, the ad can be viewed here (https://youtu.be/Vs8LcEkBfTc)

Cindy Rose, Consumer Director at Vodafone, said: “Terry’s tale is a classic Christmas story with a twist – featuring a heartwarming message of goodwill. This advert brings to life how Vodafone can play a big part in bringing people closer to their loved ones at Christmas, whilst perfectly capturing the nation’s mood at this magical time of year.”

The eight turkeys involved in the making of the ad are now living happily at the Farm Animal Rescue Sanctuary in Warwickshire.

Running throughout the festive period, the Christmas campaign will also feature shortened 10-second videos of Terry, taking centre-stage to highlight some of the great value offers at Vodafone this festive season.

The advert was created and developed by Grey London, and features the track ‘Flying Without Wings’ by Westlife.

As part of an integrated campaign across Vodafone’s owned channels, the brand has also revealed teasers of Terry across social media, hinting at his arrival ahead of Christmas.

In addition, further content will be appearing widely across print, Out of Home & digital advertising.