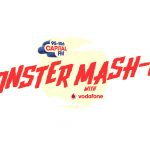 Building on a hugely successful six-year partnership, Vodafone is proud to announce it will be the headline sponsor of Capital’s Monster Mash-Up, a brand new Halloween-themed dance event which will be taking some of the UK’s biggest cities by storm this October.  Vodafone will be adding Capital’s Monster Mash-Up to its roster of Global sponsorships, along with the Big Top 40 and Capital’s Summertime Ball, making the partnership its biggest and best yet.

Vodafone and Capital will take the UK’s biggest Halloween party, Capital’s Monster Mash-Up, on the road to intimate venues in Liverpool, London and Manchester where local students and partygoers can put down their broomsticks for the night and enjoy live music from some of the world’s hottest artists, DJs and producers.

As part of the sponsorship agreement, Vodafone will work with media & entertainment group Global again to give one lucky but unsigned DJ the opportunity to perform at all three of the events as part of the Vodafone Future Breakers initiative.  Launched as part of the Vodafone Big Top 40  partnership with Global, the Future Breakers series is an initiative which gives emerging talent a shot at breaking into the music industry, the chance to record and produce their own DJ set, as well as having the live session broadcast online with the Vodafone Big Top 40.  Since February 2016 six artists and bands have been selected as Vodafone Future Breakers enjoy the money-can’t-buy prize: with one, Ryan Lawrie, getting the opportunity to play to 80,000 fans at Capital’s Summertime Ball at Wembley Stadium.  Since then Lawrie has made it onto the X Factor and impressed the judges enough to get through to Boot Camp.

Bilge Ciftci, Head of Brand for Vodafone UK, said: “Our partnership with Global has driven some great customer engagement for us over the last few years so we’re pleased to be partnering with them again.  We’re really proud to be a part of Capital’s Monster Mash-Up and also giving unsigned DJ talent the phenomenal opportunity to launch their career with Vodafone Future Breakers.”

Mike Gordon, Chief Commercial Officer at Global, said: “We love working with Vodafone because they share our ambition to break new ground, and the work we do together continues to deliver fantastic results.  We’re delighted Vodafone is partnering us for Capital’s Monster Mash-Up.”

In the run up to the three Monster Mash-Up events there will be a four week multi-channel activation campaign across Capital’s radio, TV, digital and social channels and will be supported by a roster of agencies including: Mischief PR; MEC Global; Freeman XP; Haygarth; Fuse and Wayin.

Vodafone first signed up as the headline sponsor of Capital’s Summertime Ball in 2012.  Vodafone also partners with Global on The Vodafone Big Top 40, a chart show broadcast across more than 120 radio stations each week amassing 2.4 million listeners.

Find out more about Vodafone Future Breakers and the Vodafone Big Top 40 here:

Terms and Conditions for Capital’s Monster-Mash Up can be found here: http://www.capitalfm.com/terms-conditions/monster-mash-up-tickets/