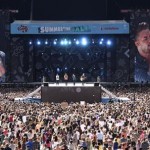 CAPITAL’S SUMMERTIME BALL WITH VODAFONE IS BACK

Vodafone and Global have signed an agreement that will see Vodafone return as the headline sponsor of Capital’s Summertime Ball for the next three years.

The new deal follows a hugely successful four-year partnership.  Research from Capital’s Summertime Ball with Vodafone 2015 shows brand consideration is significantly higher among Capital listeners who have been exposed to the partnership activity.

The relationship spans a number of areas of Global’s business with activity running across Capital’s radio, TV, digital and social channels from April and utilising Global’s access to talent and the event itself at Wembley this summer.

This year Vodafone will work with media & entertainment group Global again to bring an unsigned act to the stage at Wembley to perform.  Two Vodafone Future Breakers will compete in the four-week campaign with Capital listeners voting for the act that goes through to “Take the Stage” and perform in front of more than 80,000 music fans.  Vodafone Future Breakers is a Vodafone and Global initiative that gives emerging talent a shot at breaking into the music industry.

Alex Conaway, head of brand advocacy, engagement and activation at Vodafone, said: “The partnership has been a huge success with Capital’s Summertime Ball now playing a major role in driving brand engagement for Vodafone.  This year I’m confident we can build on the great work we’ve already done with Global to make Capital’s Summertime Ball with Vodafone 2016 the most successful yet.”

Mike Gordon, chief commercial officer at Global, said: “This is a true partnership that continues to deliver better results year after year.  Vodafone is the ideal partner for Capital’s Summertime Ball and I’m delighted they’ve chosen to work with us for another three years.”

Vodafone first signed up as the headline sponsor of Capital’s Summertime Ball in 2012.  Vodafone also partners with Global on The Vodafone Big Top 40.