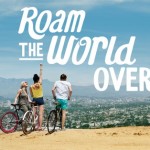 Vodafone UK customers will be able to take advantage of ultrafast 4G roaming in 40 countries with the addition of 17 destinations in time for Christmas and the New Year.

Antigua & Barbuda, Cayman Islands, Croatia, Israel, Japan, Luxembourg, Malaysia, Mexico, Peru, Philippines, Qatar, Saudi Arabia, Slovenia, Sri Lanka and Thailand have joined the existing 23 destinations announced earlier in the year meaning that Vodafone customers will be able to use ultrafast 4G services and devices in more overseas than any other UK mobile provider. Fiji and Kuwait are expected to come on line before Christmas bringing the total to 40 destinations.

All Vodafone Red price plans come with UK unlimited calls and texts, so customers using Vodafone EuroTraveller or Vodafone WorldTraveller are able to call or text home, without worrying about unexpected bills. There’s no charge for receiving calls or texts on both services and customers will only pay for the days they use their mobile abroad.

Cindy Rose, Vodafone UK’s Head of Consumer, said: “Around four million people head overseas during the festive period so today’s news is perfect for those wanting to upload photos or videos of their celebrations to their social media sites or check maps online whilst on the move.”

Vodafone EuroTraveller and Vodafone WorldTraveller are available to pay monthly and small business plans customers, whether on 4G or not. For further information visit www.vodafone.co.uk/4g-abroad