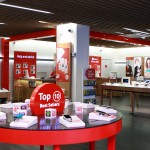 Vodafone UK has announced plans to strengthen mobile phone coverage in Wiltshire, bringing ultrafast mobile internet services to more communities and local businesses. The news comes as Vodafone goes live with its ultrafast 4G in Swindon on 22 May.

Ultrafast 4G services will help businesses in Wiltshire by helping people work where they want to, when they want to. Almost nine out of ten business leaders (86%) believe 4G will increase their productivity by providing a genuine ‘in-office’ experience wherever they are, according to research by Vodafone.* In total the arrival of ultrafast 4G services could boost Swindon’s economy up to by £100m over 5 years, according to further independent research.**

As part of £1 billion that Vodafone is spending on its UK network and services this year, Vodafone will also increase 3G outdoor coverage across both the North and South Swindon areas to reach 99% of the population over the next few years.

Mobile internet coverage plays an increasingly important role in today’s society which is why Vodafone has committed to provide coverage using 2G, 3G and 4G services to 98% of the UK population by the end of 2015. Better coverage lets people stay in touch with friends and family as well as giving access to local services. It also enables businesses to react faster to the needs of customers and introduce remote working practices for staff which can help reduce costs and increase productivity.

Fergal Kelly, CTO, Vodafone UK added: “Mobile connectivity plays a vital role in keeping communities in touch and helping to support the local economy. Our network improvements will ensure more people and businesses in Wiltshire will have the opportunity to take part in the growing smartphone revolution.”

Ultrafast 4G
Vodafone UK’s ultrafast 4G brings a choice of fantastic sports or music entertainment to local people and boosts local businesses with faster speeds, bigger data allowances and the ability to share that data at no extra cost.

Vodafone ultrafast 4G brings entertainment content to life whether at home or on the go, offering music and sports lovers a choice of access to either Spotify Premium or Sky Sports Mobile TV. That’s more than 20 million tracks from the world’s best known streaming music provider; or the best in live action football as well as tennis, cricket, golf and rugby.

The choice of great entertainment comes on top of Vodafone Data Test Drive*** for the first three months, double Vodafone’s standard data allowances and an additional 1GB of data each month for the length of the contract, plus unlimited calls and texts. Business customers meanwhile can enjoy the flexibility of Vodafone’s free data sharing SIM included in their 4G Red plans. Their 4G plans have also been boosted with an extra 1GB of data for the length of the customer’s contract.

New store in Canal Walk, Swindon
Vodafone has also relocated and refitted its Swindon store, which opened earlier this year in Canal Walk, Swindon. The Canal Walk store opened with a brand new look, bringing consumer and small business customers closer than ever to the best in mobile and innovative in-store customer training, meaning the in-store team will then be able to help set up phones or tablets and troubleshoot, as well as transferring over contacts and photos, so customers can leave the store, ready to go. Customers will also be able to click and collect, using the store as the place to pick up online purchases.

* Vodafone research showing that 86% of businesses believe that 4G will increase their productivity was conducted with 554 organizational leaders across UK PLC and is available at http://www.yourbetterbusiness.co.uk/perspective_4g_in_the_workplace.

** Estimates of economic benefit to the capital based on independent research by Capital Economics which found that 4G, when deployed to the population, could increase GDP by 0.5% across the UK. Research was based upon investment “made by the mobile telephone network operators” and deployment “by the mobile network operators”. The Swindon specific figure is based on applying this to the Gross Value Added per head (GVA+ taxes – subsidies = GDP) of the population.

*** Vodafone Data Test Drive – use as much UK data as you want for three months when you choose a Pay monthly or 12-month SIM only plan. For more information visit www.vodafone.co.uk/testdrive