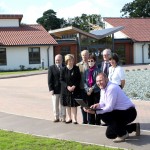 Many areas of Norfolk have until now suffered from unreliable mobile coverage, slow network speeds and lack of decent fixed broadband which is needed to link together masts. The Vodafone ROSS  programme uses Vodafone’s innovative Sure Signal technology, to bring high quality 3G voice services and much needed access to the internet via mobile devices to communities and rural areas in some of the UK’s most beautiful or remote areas.

The ROSS programme is a national initiative by Vodafone UK to provide reliable mobile access to up to 100 rural communities in mobile not-spot locations. Launched in July 2014, with support from local MPs, councils and rural action groups, the programme received an overwhelming response, with applications from across the country from the Shetland Islands to Cornwall and from the mountains of Snowdonia to the Norfolk coast.

Mobile connectivity plays a vital role in keeping communities in touch and helps support local economies. However, rural and remote locations often miss out on advantages provided by modern communication tools, due to the complexity of delivering network coverage. This can be because of the geography of the area or difficulties with planning permissions in places of outstanding natural beauty. The ROSS programme uses innovative ‘femtocell’ technology to provide an alternative solution to bring 3G mobile access in locations where it may not be possible for networks to provide coverage through traditional means.

As part of the ROSS programme, Vodafone teams have surveyed each of the 100 communities which were added to the programme at the end of last year.  The surveys included physical ground assessments by Vodafone engineers as well as detailed fixed broadband speed checks as ROSS requires a high-speed to work. The teams have also drawn up plans for viable communities to illustrate where the equipment will be sited. The process saw some of the initial communities having their implementation postponed until their community broadband speeds and availability have improved.

Jorge Fernandes, Vodafone UK Chief Technology Officer, said: “Mobile connectivity is an essential service for rural areas, however, getting traditional coverage to these areas can be deeply frustrating when faced with areas of Outstanding Natural Beauty or a lack of required broadband.  However, we’re determined not be beaten on rural coverage and we know ROSS works.  This will make such a difference – not only for the people who work and live in them, but the hundreds of visitors they receive each year.”

Norman Lamb, MP for North Norfolk commented: “This is an excellent scheme providing access to 3G voice and internet services to places in North Norfolk that have struggled with little or no connectivity for years. This is great news for local people, local businesses and the large number of tourists who visit the area. I look forward to discussing the success of the scheme with residents in High Kelling and Upper Sheringham”.

Henry Bellingham, MP for North West Norfolk commented: “Digital connectivity is really important to people across my constituency and I’m delighted that Hillington has joined other communities across the UK in getting access to mobile internet services through Vodafone’s Rural Open Sure Signal Programme. The project is a great example of local people working together with business to bring the benefits of digital connectivity to their community”.

Ben Wallace, Village Champion at Hillington said: “This is great news for Hillington, where the mobile signal has been almost non-existent up until now. It is particularly good news for the elderly and all those using and visiting Tapping House, the new hospice in the village. To have a mobile signal and be able to make a call is a huge step forward and to have 3G is beyond our wildest dreams. The Community Council would like to thank Vodafone for installing ROSS and those who have allowed their premises to be used for the greater good of the community.”

David Kendrick, Village Champion for Upper Sheringham said: “We’d like to thank Vodafone for choosing us for the Rural Open Sure Signal programme. We now have signal in Upper Sheringham. It’s a real difference for many members of the community who can now enjoy the benefits of 3G coverage.”

Robin Johnson, Village Champion for High Kelling commented: “In High Kelling over 60% of the population are 61 or older. This makes us very vulnerable in the event of any sort of ‘incident’ and utterly dependent on the best possible communications. Until recently, mobile ‘phones were almost unusable in our village. Vodafone has now brought us a 3G signal reliable over almost all our village with their Rural Open Sure Signal service. It is comforting to know that our residents have access to the emergency services and to friends and family when they need it.”

As well as using Rural Open Sure Signal to plug rural “not-spots”, Vodafone is spending around £2 billion on its network and services across the country over 2014 and 2015.  This includes the provision of HD (High Definition) Voice technology on its 3G network and the extension of its 4G coverage to 642 cities and towns and thousands of smaller communities across the UK.

Further communities will be announced over the few months. For more information on the programme, visit www.vodafone.co.uk/rural