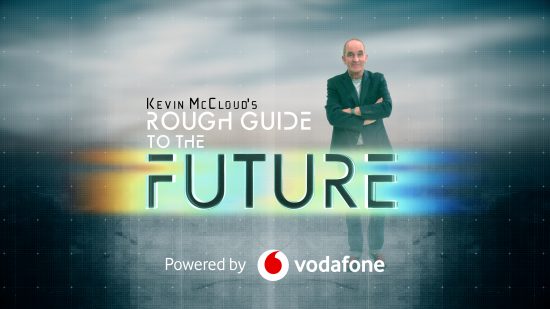 Vodafone has teamed up with Channel 4 to launch Kevin McCloud’s Rough Guide to the Future, a three-part prime-time series exploring how we are becoming more connected than ever, with innovations like 5G set to change the way we live.

Managed by Wavemaker Content in partnership with Channel 4 and produced by Boundless, Kevin McCloud’s Rough Guide to the Future will be amplified by social media content, digital activation and the traditional TV spot.

The prime-time entertainment series is the first advertiser-funded programme from Vodafone to air on terrestrial television. It will be broadcast on Channel 4, and the first episode will air on Wednesday 12th February at 9:00pm.

The UK roll-out of 5G is the biggest technology evolution since the emergence of the smartphone. Although it offers seismic potential for businesses and the public, allowing us to live and work better through 5G-enriched applications and enabling huge innovation, many consumers currently perceive its key benefit as just significantly faster download speeds. Vodafone is leading the roll-out of 5G across Europe, and is focused on building consumer trust and awareness as it begins to become more widely available.

The TV series investigates the effect technology will have on our lives in a humorous, relatable and entertaining way. Across three 60-minute episodes, Kevin McCloud will challenge a group of cynical celebrities to discover how innovations, including 5G technology, are driving the latest in technical advancement. This includes sending comedians Jon Richardson and Phil Wang, and presenter Alice Levine, to far-flung destinations including China, Japan and America, where they encounter robotic butlers, lab-grown meat, driverless cars and other futuristic tech.

Max Taylor, Consumer Director, Vodafone UK said: “We want the public to know that our investment in 5G, which sees us offer it in more places than any other network and at no extra cost, is about so much more than lightning-fast download speeds. It is about connecting us for a better future. This new series brings to life the huge possibilities that 5G can unlock in areas as diverse as robotics, sustainability, and communication. I hope it will inspire the nation as to the potential of 5G.”

Vodafone is the only network operator with 5G roaming in 108 place across Europe including 40 locations in the UK and 68 across Germany, Spain, Italy and Ireland.