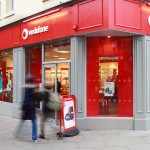 Vodafone has today unveiled plans to ramp up its UK investment programme with the opening of 150 new shops and the creation of 1,400 new retail roles over the next 12 months. The £100 million boost to the UK’s high street forms parts of Vodafone’s plans to invest £1 billion in 2014 in the networks and services relied upon by its more than 19 million UK customers. Vodafone UK’s 2014 capital investment programme is the largest in its history – dating back to the company’s foundation in the 1980s – with work already well underway to deliver Vodafone’s commitment to provide indoor and outdoor coverage using 2G, 3G and 4G services to 98% of the UK population by 2015.

Speaking in support of Vodafone’s UK plans, the Prime Minister David Cameron said: “This is a fantastic vote of confidence in the UK workforce from a company investing for the future to harness the next generation of digital services. It is a sign that our long-term economic plan to create jobs and build a stronger, more competitive economy is working, helping ensure a better and more financially secure future for Britain, for hardworking people and their families.”

Vodafone UK Chief Executive Jeroen Hoencamp said: “This year we’ll invest more than ever before to provide our customers with the strongest network and best services in the UK. We’re also committed to putting our brand and our people where our customers want us: right at the heart of their high street and shopping centre. Our £100 million retail investment this year will increase our ability to serve our customers better with highly skilled personal advice and support in 150 brand-new locations.”

In addition to its investment in direct retail, Vodafone will look to work closely with indirect partners who share its vision of value generation and network and service differentiation.

The 150 shops will open over the next 12 months, increasing the total number of Vodafone’s branded UK outlets to more than 500. The first shops to open as part of this programme will be in Notting Hill, Fulham, Walthamstow, Wembley, Ilford, Perry Barr and Bicester.