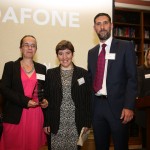 Employees at Vodafone UK’s headquarters in Newbury proved they have what it takes, winning the prestigious Star Partnership Award at Norwood’s 2015 Annual Volunteering Awards, recognising excellence in volunteering.

The charity, which supports vulnerable children and their families, children with special educational needs and adults with learning disabilities, relies on more than 1,000 volunteers every year.

Over the last year, 175 dedicated Vodafone staff have contributed a staggering 1,500 hours of their time to volunteer at Ravenswood in Crowthorne, which provides residential care, supported living accommodation and leisure and learning opportunities for people with learning disabilities.

The volunteers spent their time and energy renovating stables, laying concrete, painting and decorating and building a chicken coop. Working together they even transformed an overgrown patch of woodland into a local beauty spot.

The award ceremony was held at London’s Royal Society of Chemistry on Wednesday 2 September, with the judging panel made up of Rachael Davis-Stollar, Ashley Sweetland MBE, Lady Hazel Cosgrove, Ronnie Harris and Judy Lee.

Chair of the judging panel Rachel Davis-Stollar praised the team’s commitment, saying: “It’s not just the hard graft, it’s the fact that these groups relish working alongside the people Norwood supports. They see first hand the life changing nature of the work the charity does and this insight is invaluable when it comes to spreading the word.”

Accepting the award on behalf of Vodafone, Darren Shrubb, Business Operations Manager, Technology Enterprise Services, said: “To have won the award in the Star Partnership category and being up against a couple of really good organisations really is fantastic. Volunteering is amazing, not just on the day, but because of the long-term team bonding that you get. It’s a really good opportunity to strengthen those bonds within your team as well as giving something back to the community.”

The charity’s film of the event can be found here.