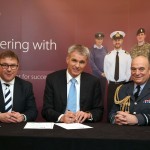 At the “Partnering with Defence : National Employer Conference” held in London today Vodafone also pledged to implement flexible working conditions for members of staff who are Reservists which will allow them to continue their training and be deployed on exercise when needed by the Ministry of Defence.

As part of its commitment Vodafone is proactively encouraging the recruitment of ex-service personnel and Reservists, in tandem with Career Transition Partnership (CTP), by creating a talent network via a dedicated HM forces recruitment portal.

Vodafone has also worked with the Royal Corps of Signals to develop a simplified recruitment process for Royal Corps of Signals’ Service Leavers, which it will be piloting in the spring. This will be a proactive internal policy for Reserve personnel, which will maximise Vodafone’s support to UK resiliency and contingent operations. At the centre of this policy is a clear intent to maximise recruiting opportunities for the Royal Signals Reserve within Vodafone. Once established this policy will be equally applicable to other Army, Royal Air Force and Royal Navy personnel who are leaving or who have left the Services.

Jeroen Hoencamp, Vodafone UK CEO, who also served in Royal Netherlands Marine Corps said, “We are very proud to play our part in supporting Her Majesty’s Armed Forces. We already employ many former service personnel and today’s commitment through the Armed Forces Covenant reinforces the close relationship that we have with the UK Armed Forces. We look forward to supporting both veterans and reservists in the years ahead.”

Minister of State for the Armed Forces, Rt Hon Mark Francois MP, said, “It is right that everyone, including businesses, recognises the tremendous contribution and sacrifice that our Armed Forces and their families make for our country. I am pleased to see Vodafone taking the opportunity to formally support our Armed Forces community, both those still serving and those who have left, and to make a real difference to their lives by signing the Corporate Covenant.”

Vice Chief of the Defence Staff, Air Chief Marshall Sir Stuart Peach, said: “The commitment made today by Vodafone is a very valuable signal of support to the Armed Forces community. It illustrates the company’s high regard for the integrity and skills held by veterans and reservists, which translates into many walks of life. It is clear that employers, such as Vodafone, view reserve service as an asset and that their employment is mutually beneficial to both the country and the company.”