Vodafone reveals the UK’s favourite takeaways…and how much we spend! 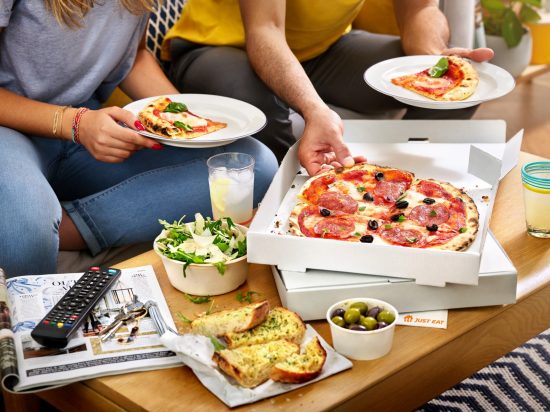 New research from Vodafone highlights Brits as a nation of takeaway lovers, with a quarter (25%) admitting to ordering takeaway meals three or four times a month. The survey reveals that we share a nationwide love of ordering meals at home, but what we order differs across the country. Those in the North East opt for a traditional fish and chips (17%), while Londoners prefer a steaming hot pizza (18%).

Elsewhere, both Scotland and the South West were unveiled as the biggest fans of a Chinese takeaway, with a quarter of the population (23%) in each area selecting it as their top choice. The Welsh confirmed that fried chicken was their second favourite pick (13%), after fish and chips (14%).

The research comes as Vodafone has launched Vodafone Together, a package of broadband and mobile to save families up to £380 a year. On top of that saving Vodafone Together customers can receive amazing family experiences, treats and discounts. The first monthly reward launches today, a £12 Just Eat voucher to spend towards a meal of their choice, helping to make that takeaway treat a little more affordable.

Nationally, fish and chips with a drink can vary by region with Brighton in the South East proving to be the most expensive (average of £12.70 for a cod, chips & drink) versus Glasgow and Birmingham coming in at an average of just £8 for the meal and drink.

Findings highlighted that Londoners are more likely to ‘rotate’ their orders to try new restaurants and cuisines, while people in Wales are creatures of habit, with 64% being most likely to stick to the tried-and-trusted.

Among the top reasons Brits list for not switching up their order is it being simply a ‘habit’ (31%), or being too ‘scared’ to try something other than their favourite dish (23%), in case it ends in disappointment. One-in-four (25%) stick to the same as it’s the closest one, or because they are the cheapest option (25%).

The anticipation of ordering and waiting for a takeaway was also revealed as a reason for purchasing, with just under half (47%) reporting an extra ‘spring in their step’ on days they know they’ll be ordering dinner in. More than half (52%) get takeaways as a treat, while 36% will choose one when they simply can’t be bothered to cook, to save the pain of washing up after cooking (15%), or to stop their kids from nagging for a treat (10%).

Across the country, ordering dinner in seems to mostly be a weekend treat, with Friday being voted the favourite day for takeaways by 30% of respondents, closely followed by Saturday (25%). However nearly one-in-10 (9%), said having a hump day takeaway on a Wednesday to get them through the rest of the week.

Londoners spend the most on their takeaways each month, paying an average of £73.70 – £20 more than the national average. They also order more often than anyone else, with 24% of Londoners ordering takeaways four times a month. Scots are second, forking out as much as £61 on takeaways each month, while people in the South West typically spend £47 a month.

Across the nation, adults believe £12 should be enough to get them one side dish and one main – although one-in-20 would expect one main, two sides and a drink for the same spend.

Find out more on how to save on broadband and save on mobile and get a £12 voucher to spend on a meal from Just Eat order.

Yorkshire and the Humber – Fish and chips (20%)

Survey conducted with a sample of 2,000 UK adults.

Vodafone Together: Customers can get i) a monthly discount on Home Broadband plan and ii) 30% off additional mobile airtime plans of 12 months or more, for the duration of their contracts. Additional mobile plans are Pay Monthly SIM only, Airtime or Mobile Broadband plans. Discounts can’t be used in conjunction with any other discounts. £380 saving over 12 months: based on family of four purchasing one Superfast 2 Broadband Pro Plan (67Mbps avg speeds) + four SIMO Unlimited Max plans with Vodafone Together vs purchasing separately. Terms, eligibility & details.

Vodafone Together combines Pro Broadband and Vodafone EVO for mobile to give families the best of both worlds and save them up to £380 a year:
Find out more