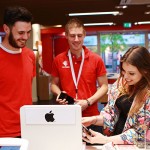 Vodafone UK has opened it’s ‘doors’ with a new and improved look in Birmingham’s Selfridges – cementing Vodafone’s commitment to the providing services on the high street. The store forms part of Vodafone’s £100 million nationwide investment in its retail estate, which has included opening 150 new shops and creating 1,400 jobs during the past two years.

The new store is designed to bring customers closer than ever to the best in mobile, by displaying the latest and best-selling devices, so customers can try before they buy. The in-store team of nine will be on hand to help customers set up their phones or tablets on the spot, as well as transferring over all their contacts and photos thanks to the Vodafone Red Box, so they can leave the department store sorted and ready to go.

Whether a consumer or a small business, Vodafone has a range of services available, from  innovative Vodafone Red Value Bundles – giving unlimited calls, texts, generous amounts data and inclusive roaming across 40 destinations – to the latest ‘must-have’ handsets and tablets. The in store team are there to help – even if it’s simply to ask their advice on how to get the most from a phone or tablet.
Jane Stanley, Store Manager of Vodafone Selfridges Birmingham said: “We’re delighted to be opening our new store in one of the most iconic department stores in Britain. It’s been a significant investment and clearly demonstrates our commitment to serving our customers in Birmingham. We’ve got some great offers so pop in, see what we’ve got or simply ask our advice.  We’re here to help.”

The refit of the new Vodafone store in Selfridges Birmingham forms part of Vodafone’s plans to invest £1 billion in the networks and services relied upon by its 19 million UK customers.