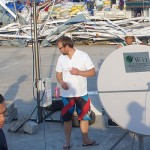 Four Vodafone Foundation Instant Network volunteers from Vodafone New Zealand and the Vodafone Foundation deployed to the Republic of Vanuatu, to help restore communications to areas devastated by Cyclone Pam. Cyclone Pam – a category 5 tropical storm that hit Vanuatu last month, crippling the islands’ infrastructure and telecommunications and claiming the lives of at least 16 people.

In a 10 day deployment the team focused on connecting Tanna Island, the second largest island with a population 29,000. The team supported the relief effort, providing free calls to people affected and helped businesses get back online  including the bank  which used  the network to process 2 million Vatu in transactions and order 8 million Vatu in cash to replenish their ATM.

In total, 1,487 calls were made totalling 4,156 minutes, supporting an estimated 7,250 people and 25% of the island’s households. 13 agencies including World Vision, Unicef, Red Cross also used the connection our team helped establish, sharing data ranging from aid distribution spreadsheets to co-ordinates for remote aid drops by helicopters.

Islanders who had been waiting for the network to come online jumped at the chance to call family and friends in Vanuatu and the rest of the world. “There was an older woman who handed a phone back to me after having spoken to her son for the first time in ten days,” Instant Network Volunteer Lise recalls. “She couldn’t speak as she had tears streaming down her face and it was obvious she was bursting with relief. It was completely heart-warming to see and was the exact reason I’d wanted to sign up to be an Instant Network volunteer.”

Following the end of the deployment Vanuatu Telcoms CEO Prakash Bheekhoo contacted Vodafone to say: “On behalf of my whole team, my board of directors and the Vanuatu people who we have been able to connect and support, TVL would like to express sincere gratitude to you and your team in helping make this possible.”