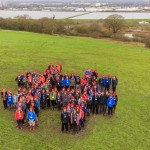 The Vodafone Foundation today celebrates 25 years of implementing digital technology which has enhanced people’s lives in areas of health, education and disaster relief in the UK and worldwide.

Over that time, Vodafone’s local foundations operating in 27 countries have invested a combined $1 billion in their communities and supported more than 2,500 organisations.

In the UK, the Foundation has supported thousands of Vodafone UK employees to raise millions of pounds for UK charities, via a company matched funding scheme, as well as investing almost £30 million in a range of innovative programmes and partnerships such as:

Helen Lamprell, UK Trustee of the Vodafone Foundation, said: “The Vodafone Foundation has helped us and our employees to make a massive difference to the communities in which we live and work. Technology is playing an increasingly vital role in bringing communities together and we are thankful that the Foundation’s commitment to using technology for good remains as strong as ever.  We look forward to building on our existing programmes and partnerships to deliver even greater benefits over the next 25 years.”