Vodafone first to switch on full 5G in the UK 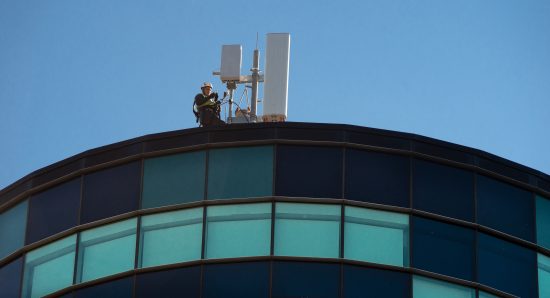 Vodafone today became the first company in the UK to carry full 5G over a commercial network.

Live mobile data traffic is now being streamed to and from the Internet exclusively over 5G from a site in Salford, Greater Manchester, connected to Vodafone’s nationwide converged fibre network. Until now, companies have tested the technology either within a single location, or using parts of the 4G network to complete the 5G service.

Providing coverage to MediaCityUK and the surrounding area, the new site in Salford is an important step in connecting businesses and consumers with 5G technology. It is enabling Vodafone to test the technology end-to-end using wireless routers and forms part of its 5G trial in seven cities this year.

Vodafone is now inviting local companies and organisations to register their interest in experiencing the faster data speeds and ultra-responsiveness of 5G at its new ‘Future Ready’ innovation centre and digital incubator when it opens in Spring 2019. In partnership with the Mayor of Greater Manchester and MediaCityUK, the innovation centre will be equipped with our very latest digital technology. This includes 5G wireless routers, gigabit-capable optical-fibre links and Internet of Things (IoT) services, which can digitally connect everything from office security systems, vehicles, and household appliances to livestock and pets.

When 5G-compatible handsets and devices become available, people will be able to play games on the go in 4K resolution with little or no time lag. They will also be able to immerse themselves in augmented reality where virtual objects appear in real-life surroundings and enjoy extremely fast Internet access.

Vodafone UK Chief Executive Nick Jeffery, said: “We are leading the roll out of 5G across the UK, starting with Greater Manchester. A further six cities – Birmingham, Bristol, Cardiff, Glasgow, Liverpool and London – will shortly receive full 5G too. Next year, we will bring 5G to the Scottish Highlands, Cornwall and the Lake District, among other locations.

“We have worked closely with the Mayor of Greater Manchester, Andy Burnham, to help ensure the city is not only an economic powerhouse, but also a digital powerhouse. That is why we are making a multi-million pound investment to offer world-class communications to Greater Manchester’s thriving media and tech community, consumers and our own 1,000 or so employees who work there.”

Vodafone will open up its innovation centre to winners of Vodafone Techstarter, an award for innovative technology with a social purpose. Techstarter offers a £300,000 fund through a partnership with the Vodafone Foundation and Social Tech Trust, the UK’s leading supporter of socially-motivated tech ventures.