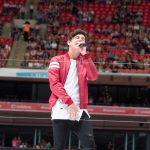 Ariana Grande’s performance topped the bill at Capital’s Summertime Ball with Vodafone for the amount of social media traffic and voice calls generated by fans on the Vodafone UK network.

Ariana Grande’s performance topped the bill at Capital’s Summertime Ball with Vodafone for the amount of social media traffic and voice calls generated by fans on the Vodafone UK network.

Top artists such as Little Mix, Ariana Grande, Nathan Sykes, Louisa Johnson, Years & Years, Craig David, Flo Rida and Ryan Lawrie, the winner of the Vodafone Future Breakers competition, had concert goers reaching for their smartphones like never before as Vodafone customers captured their favourite acts on social media and called their friends.  As a result, during last weekend’s seven-hour concert, the Vodafone network carried:

In total, Vodafone carried nearly 1,500GB of data, the equivalent of 30 million Snapchats sent and received across its 4G network at the event.  Vodafone, the headline sponsor, was able to anticipate the mobile demand and installed additional coverage to ensure customers never missed a chance to share their day on their mobiles.

Capital’s Summertime Ball comes at a time when Vodafone is making its largest ever network investment in London, having spent £200 million in the capital over the last two years which has resulted in 4G coverage being extended to 99% of London with the lowest drop call rate ever.  Vodafone has also recently launched a 30 day network guarantee to give new and upgrading customers the chance to try out Vodafone’s network before committing to a contract. It is the only mobile company to offer such terms.