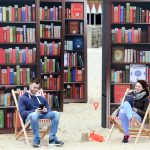 On the 400th anniversary of Shakespeare’s death, Vodafone and the British Library have made some of the earliest and rarest editions of Shakespeare’s plays available to all, allowing people to download the Bard’s most popular works from specially-designed wallpaper featuring virtual library bookshelves.

Shakespeare’s plays began to be printed in 1594 and appeared as pamphlets called ‘quartos’. Affordably priced and pocket-sized, the creation of these editions made Shakespeare’s works available to the masses in print for the first time, and today they are the earliest printed record of many of his greatest plays.

The pop-up Digital Library is providing new access to free digital copies of the quartos by allowing people to simply scan the QR codes printed on the virtual books as the ‘digital library’ tours the UK.  The wallpaper will also provide digital links through to the British Library’s Discovering Literature website, revealing more about the world of Shakespeare and his plays, from King Lear and madness to the violence of Romeo & Juliet and the life of the Bard himself.

The Digital Library will encourage young and old across the nation to remember the great works of the playwright, poet and pioneer and celebrate his achievements as new research (1) released by Vodafone today found that almost one in ten Brits were unable to recall who William Shakespeare is and more surprisingly a quarter of the nation (25%) are unaware of his work, claiming he wrote motion picture titles such as Love Actually, Titanic and Shakespeare in Love.

With almost 40% of British teenagers unaware that everyday words and phrases such as “swagger”, “gossip” and “birthplace” were first coined by the Bard and half of 13-17 year olds unaware of what a soliloquy is, claiming it is a “material used to make car tyres” or a “pasta dish”, the Digital Library will help inspire the nation through Shakespeare’s classic works – using a modern method which provides unprecedented access.

The Digital Library’s first official appearance will be as part of the St George’s Day celebrations in Trafalgar Square on the 23rd April, which also marks the 400th anniversary of Shakespeare’s death. It is open to the public from midday until 6pm but, in order to share the quartos with a broader audience around the UK, from the 25th April the Digital Library will be taken on a tour of cities and rural locations, including Birmingham, Penzance and Silchester (one of the UK’s oldest villages).

What’s more, as part of Vodafone and the British Library’s Digital Library initiative, families, schools and young people across the country will have the chance to win their very own roll of Digital Library wallpaper – with 400 rolls created by Vodafone and the British Library up for grabs – allowing them to experience Shakespeare’s greatest works wherever and whenever they choose.

“The look of the Digital Library is inspired by the shelving of the iconic King’s Library Tower, a tall glass structure at the heart of the British Library building in St Pancras London, which houses the extensive collection of books, maps and pamphlets amassed by King George III. This extraordinary collection includes a number of Shakespeare’s original quartos held by the Library containing the earliest record of some of his most famous plays.

The quartos were designed to be read by the broadest possible audience, and so it is extremely fitting to share them digitally in the 400th anniversary of Shakespeare’s death via the Digital Library tour with Vodafone. We encourage anyone inspired by Shakespeare’s quartos to visit our Discovering Literature site containing more than 300 digitised treasures which bring his world to life, or come to see our Shakespeare in Ten Acts exhibition in which you can see first editions of Hamlet and Love’s Labour’s Lost in the flesh.”

Helen Lamprell, Vodafone UK’s Director of Corporate & External Affairs, said: “Mobile technology is playing an increasingly vital role in bringing culture and communities together and this wonderful initiative with the British Library builds on our global campaigns supporting young people’s constructive use of digital technology.  It also allows us to bring our network to life, with customers across the UK being able to benefit from our great coverage and impressive speeds to download and own these iconic Shakespearean plays.  We hope people of all ages will take advantage of our digital library and enjoy the opportunity to own and read some of these magnificent works.”

The initiative is a continuation of Vodafone’s commitment to using technology for good. Education and literacy programmes are a key focus for the Vodafone Foundation, Vodafone’s philanthropic arm, and other initiatives at the company are focused on helping young people and their families improve their digital skills, safety and confidence. Vodafone UK recently launched long term partnership with The Scout Association, supported by the Vodafone Foundation, with a Digital Manifesto which empowers hundreds of thousands of young people to make more of the opportunities to explore their digital potential.

(1) Research conducted by Censuswide on behalf of Vodafone – carried out with 2,000 respondents age 13 plus. April 2016

About the Discovering Shakespeare project

William Shakespeare’s plays began to be printed in 1594 and appeared as a small cheap pamphlet called a quarto. Today they are the earliest printed record of many of his greatest plays.

To mark the 400th anniversary of this iconic playwright’s death, the British Library and Vodafone are collaborating to make Shakespeare’s quartos accessible via 400 rolls of ‘digital wallpaper’.

Using QR codes visitors can download the quartos directly to their phones from the wallpaper, and also explore the British Library’s new website, Discovering Literature, which brings the world of Shakespeare’s plays to life.

The wallpaper will be unveiled in a pop up ‘digital library’ at a special event in Trafalgar Square on 23 April 2016, before visiting other locations around the UK.

All the content on the Digital Library will be free to access, and the development of the project is being fully funded and resourced by Vodafone, drawing on digitised British Library collections.

About the British Library’s Shakespeare season.

To mark the 400th  anniversary of Shakespeare’s death the British Library has made 300 of its digitised treasures related to the Bard available online on its Discovering Literature website.

From 15 April to 6 September we will host a major exhibition, Shakespeare in Ten Acts, which explores how the Bard became a cultural icon through ten key performances.