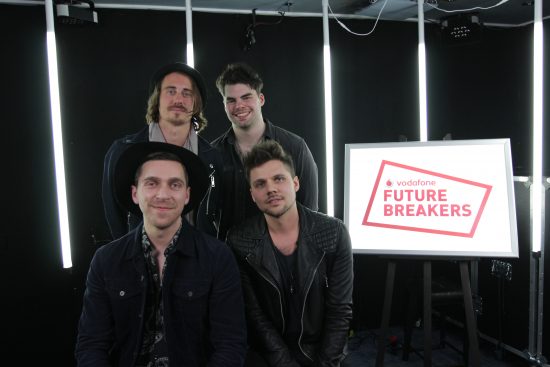 Coax are celebrating after being named the next Vodafone Future Breakers winner. This gives the four bandmates - Andy Muscat, Ben Kennedy, Brian Flack and James Stephens - a fantastic opportunity to launch their budding music career.

Portsmouth based band, Coax, are celebrating after being named the next Vodafone Future Breakers winner. This gives the four bandmates, Andy Muscat, Ben Kennedy, Brian Flack and James Stephens a fantastic opportunity to launch their budding music career. The Vodafone Future Breakers initiative, launched as part of the Vodafone Big Top 40 partnership with Global, has given Coax the money-can’t-buy chance to record and produce their song ‘Heal and Deliver’ with industry professionals, as well as their live studio session broadcast online with the Big Top 40.

Coax formed around eight months ago after Portsmouth session artists, Andy and Ben, began writing songs together. They later joined up with fellow session artists James and Brian after realising they all shared the same passion for music. Since then, the guitar-based band have focused on gigging across the UK, including many festivals, whilst working towards releasing their first EP.

Taking inspiration from the likes of One Republic and Kings of Leon, Coax think they can bring something new to the music scene with their infectious blend of pop, indie and rock. The band now hopes this big break will be the stepping stone to something bigger, including releasing their EP soon.

On their experience with Vodafone Future Breakers, Coax commented: “Being a Vodafone Future Breaker has given us a huge platform to showcase our music. Writing and performing our own songs gives us such a buzz, so getting to record and perform one of our songs in the studio has been amazing. We can’t wait to write more and hopefully one day we’ll have people singing back to us!”

The Vodafone Big Top 40 is the UK’s number 1 chart show with 2.4 million listeners every week. It is presented by Marvin Humes and Kat Shoob, and produced by Global, the media & entertainment group.  The chart is the UK’s first real time chart show with the top 10 taken live from iTunes during the show.  Listeners across the UK can tune in on Sundays from 4pm across 130 radio stations, online at bigtop40.com and through the Big Top 40 app.