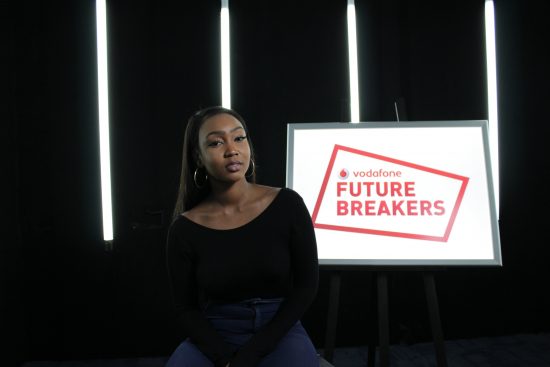 Singer-songwriter Trinna Carter, the next Vodafone Future Breakers winner, is celebrating a fantastic opportunity to launch her budding music career.

Peckham local, Trinna Carter, is celebrating after being named the next Vodafone Future Breakers winner, giving the unsigned singer-songwriter a fantastic opportunity to launch her budding music career. The Vodafone Future Breakers initiative, launched as part of the Vodafone Big Top 40 partnership with Global, has given Trinna the money-can’t-buy chance to record and produce her own song, ‘Too Bad’, with industry professionals. Her live studio session will also be broadcast online with the Big Top 40.

Trinna’s passion for music ignited at a young age, but it was her sister who pushed her to apply to Vodafone Future Breakers and gave her the confidence to put her music out to an online audience; having previously just focused on small local gigs. From growing up in St Lucia, much of Trinna’s music draws on Caribbean roots and is fashioned as a real mix of reggae and R&B.  Now taking inspiration from the likes of Jah Cure and NAO, the 24-year-old hopes this big break will be the stepping stone to something bigger.

On her experience with Vodafone Future Breakers, Trinna commented: “The best thing about being a Vodafone Future Breaker is being able to get into the studio and work with industry professionals – that’s when this dream became real for me. This opportunity has been amazing and I’m now working with a couple of artists, including ‘Yxng Bane’ to bring out an EP later this year, so watch this space.”

Fronted by the Vodafone Big Top 40’s very own Marvin Humes, Vodafone Future Breakers is continuing the search for the best unsigned talent from across the UK to join our previous winners, including Ryan Lawrie and Roman Road, as the next big thing in music. Listeners, budding artists, DJs and band members can still get involved and enter their tracks or videos through the dedicated hub where they could win a recording studio session with a top industry producer.

The Vodafone Big Top 40 is the UK’s no. 1 chart show with 2.5 million listeners every week. It is presented by Marvin Humes and Kat Shoob, and produced by Global, the media & entertainment group.  The chart is the UK’s first real time chart show with the top 10 taken live from iTunes during the show.  Listeners across the UK can tune in on Sundays from 4pm across 130 radio stations, online at bigtop40.com and through the Big Top 40 app. Source: RAJAR / Ipsos-MORI / RSMB, period ending April 2nd 2017.