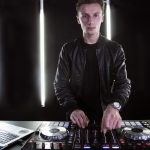 Worcester local Jamie Macdonald, aka Jamie M, is celebrating after being named the next Vodafone Future Breakers winner, giving the unsigned DJ a fantastic opportunity to launch his budding music career. The Vodafone Future Breakers initiative, launched as part of the Vodafone Big Top 40 partnership with Global, has given Jamie the money-can’t-buy chance to record and produce his own mix with industry professionals, as well as his live studio session broadcast online with the Big Top 40.

Fashioning his music as a mix of deep house and EDM, Jamie has spent the last three years mainly playing across Worcester clubs, most recently taking on Freshers’ Week across Worcester, Coventry and London.  Jamie’s flair for music first became apparent in his involvement with musical theatre as a child, before he later turned his hand to house music. Since first performing at his sister’s birthday party aged 12, Jamie has come a long way and hopes to go even further thanks to Vodafone Future Breakers.

Taking inspiration from the likes of fellow DJ Martin Garrix and top DJ producer Free Jak, the 19 year old hopes this big break will be the stepping stone to something bigger. Having primarily focused on performing in local clubs, Jamie is excited to be bringing his sound to much bigger audiences via the Big Top 40.

On his experience with Vodafone Future Breakers, Jamie commented: “I think the best thing about winning this competition is the recognition that now comes with it, and it’s what I’ve worked so hard for. Recording my mix live in the studio was such a fantastic experience, especially working with some brilliant industry professionals. Hopefully I can use the Vodafone Future Breaker title to move forward and start to play across the rest of the UK and Europe.”