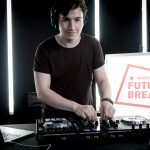 Manchester local Chris Durkin is celebrating after being named the next Vodafone Future Breaker winner, giving the unsigned DJ a fantastic opportunity to launch his budding music career. The Vodafone Future Breakers initiative, launched as part of the Vodafone Big Top 40 partnership with Global, has given Chris the money-can’t-buy chance to record and produce his own mix with industry professionals, as well as his live studio session broadcast online with the Big Top 40.

Fashioning his music as a low-tempo take on electronic, Chris thinks he can bring something new to the music scene and really give people a reason to care about electronic music. Durkin’s upbringing was grounded in a variety of music influences from friends and family, but he was first set on playing guitar in a band, only later turning his hand to electronic music. He soon realised this was his true love after playing around with pairing various sounds together and falling for the energy of the electronic music scene.

Taking inspiration from the likes of Flume and SG Lewis, the 21 year old DJ hopes this big break will be the stepping stone to something bigger, including producing many more tracks over the coming year. Having primarily focused on performing in local Manchester clubs for the past year, Chris is excited to be bringing his sound to bigger audiences via the Big Top 40.

On his experience with Vodafone Future Breakers, Chris commented: “I think the best thing about winning this competition is that it can really push my career forward. I can now go to gigs and say that I’m a Vodafone Future Breaker – it’s a massive deal to everyone. The whole experience has been amazing though, just performing my mix in the studio was brilliant, with such a good atmosphere.”

Find out more about Vodafone Future Breakers and the Vodafone Big Top 40 here: