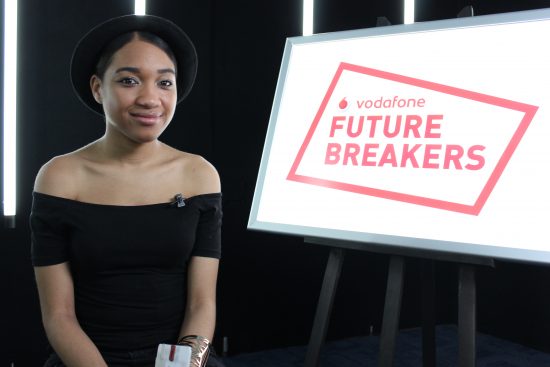 Enfield local Kacey Chambers is celebrating after being named the next Vodafone Future Breakers winner, giving the unsigned singer-songwriter a fantastic opportunity to launch her budding music career. The Vodafone Future Breakers initiative, launched as part of the Vodafone Big Top 40 partnership with Global, has given Kacey the money-can’t-buy chance to record and produce her single ‘Let It Go’ with industry professionals, as well as her live studio session broadcast online with the Big Top 40.

Kacey first found her passion for music at a young age, before regularly performing in church, weddings and fashion shows. After studying music at college, she later started her own YouTube channel, creating original content for music videos with the support of her family. This culminated in playing local gigs, before finally being recognised as a Vodafone Future Breaker.

Taking inspiration from the likes of Michael Jackson and Whitney Houston, the 23 year old musician mainly produces tracks with a mixture of soul, pop and R&B: bringing something fresh to the music scene by combining both new and old styles of music. Kacey hopes this big break will be the stepping stone to something bigger, including writing, producing and releasing an EP very soon.

The Vodafone Big Top 40 is the UK’s number 1 chart show with 2.4 million listeners every week. It is presented by Marvin Humes and Kat Shoob, and produced by Global, the media & entertainment group.  The chart is the UK’s first real time chart show with the top 10 taken live from iTunes during the show.  Listeners across the UK can tune in on Sundays from 4pm across 130 radio stations, online at bigtop40.com and through the Big Top 40 app. Source: RAJAR / Ipsos-MORI / RSMB, period ending September 18th 2016.