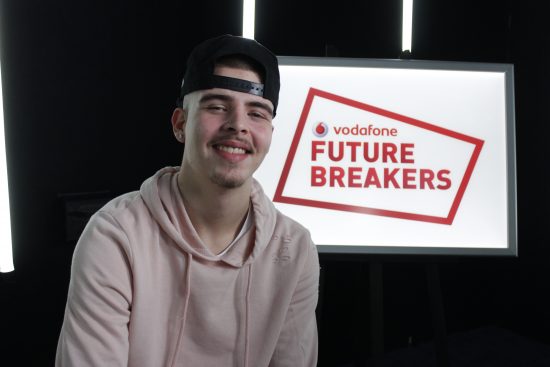 Hip-hop singer-songwriter Clark King, the next Vodafone Future Breakers winner, has a fantastic opportunity to launch his budding music career.

Brentwood local, Clark King, is celebrating after being named the next Vodafone Future Breakers winner, giving the unsigned hip-hop singer-songwriter a fantastic opportunity to launch his budding music career. The Vodafone Future Breakers initiative, launched as part of the Vodafone Big Top 40 partnership with Global, has given Clark the money-can’t-buy chance to record and produce his own song with industry professionals, as well as his live studio session broadcast online with the Big Top 40.

Fashioning his music as a mix of hip-hop, rap and pop, Clark has spent the last two years mainly playing across local Essex and London clubs, most recently taking on a Brit Awards after-party in Mayfair. Clark’s flair for music first became apparent in his involvement in a choir as a child, before later becoming a solo singer-songwriter gigging across open mic and college nights.

Taking inspiration from the likes of Chris Brown, Ed Sheeran and Stormzy, the 19-year-old hopes this big break will be the stepping stone to something bigger. Having primarily focused on performing in local clubs, Clark is excited to now be bringing his sound to much bigger audiences via the Vodafone Big Top 40.

On his experience with Vodafone Future Breakers, Clark commented: “The best thing about winning this competition is that it’s given me more confidence in my abilities and the encouragement to keep pushing forward with my dream. Working with industry professionals in the studio has been a privilege and is a huge platform for big things in the pipeline this year, so I can’t wait to see what’s next!”

The Vodafone Big Top 40 is the UK’s number 1 chart show with 2.4 million listeners every week. It is presented by Marvin Humes and Kat Shoob, and produced by Global, the media & entertainment group.  The chart is the UK’s first real time chart show with the top 10 taken live from iTunes during the show.  Listeners across the UK can tune in on Sundays from 4pm across 130 radio stations, online at bigtop40.com and through the Big Top 40 app. Source: RAJAR / Ipsos-MORI / RSMB, period ending December 18th 2016.