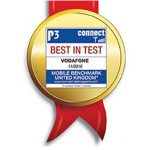 One of the world’s leading independent mobile network testing companies, P3, has reported the best network performance by Vodafone UK in the last 30 years. In their annual survey of all UK mobile operators, P3 found that Vodafone UK delivered:

Vodafone UK’s network leadership follows a £2 billion investment programme in its network and services since 2014 – the largest in the company’s history. Vodafone UK has upgraded or installed more than 5,000 4G-enabled mobile sites over the last year alone to bring world-class 4G outdoor coverage to 95% of the UK population.  In a sign of its confidence in the strength of its network, Vodafone recently introduced a Network Satisfaction Guarantee giving new and upgrading customers a 30 day trial to experience for themselves the quality of the network before they fully commit to Vodafone.

The company plans to invest a further £2 billion in its network and services over the next three years, including accelerating the expansion and upgrading of its network with the addition of around 400 new base stations every month. Enhancing rural coverage will be a key priority in that ongoing investment programme, especially in more remote “not-spot” locations with limited or no access to mobile services. Vodafone is already leading the industry in developing innovative approaches to the challenge of poor coverage in rural areas. The company’s Rural Open Sure Signal programme has brought 3G coverage to 84 rural communities across the UK over the last two years; Vodafone now plans to build on that success with its new Community Indoor Sure Signal initiative*.

P3 has compiled more than 60,000 measurement hours in 47 countries during 2015. The company has conducted independent network benchmark testing for almost 15 years and is widely considered to be a global leader in its field. In a similar UK survey conducted by P3 in 2014, Vodafone UK was placed in fourth place.

Vodafone UK Chief Executive Nick Jeffery said: “We’re building the UK’s strongest network designed, site by site, to meet all of our customers’ needs, wherever they are. These results are a welcome validation that our massive investment programme is making a real difference for our customers.”

Our 4G network coverage currently reaches over 99% of the UK population. And in October 2020, Vodafone was named Network Provider of the Year by readers of leading technology advice website, Trusted Reviews.