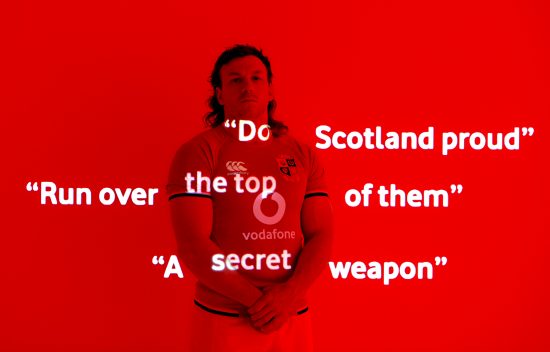 New images from Vodafone highlight important role of tech in connecting the players to the fans during the 2021 Tour, the most connected yet.

Vodafone, Lead Partner of the British and Irish Lions Tour to South Africa, has released a series of powerful new images depicting ambassadors Maro Itoje and first-time Lions Hamish Watson and Louis Rees-Zammit. The images see emotive and personal social media messages of support, from Lions fans across the four nations, projected onto each of the star rugby players.

Vodafone and the British and Irish Lions are brands united by a shared commitment to connect people to each other and the things they love. The new imagery is a powerful demonstration of how Vodafone is bringing fans closer to the 2021 Tour and the squad than ever before through its digital-first campaign.

The images have been released ahead of the Vodafone Lions 1888 Cup which takes place on Saturday 26 June at Murrayfield, Edinburgh. The messages of encouragement from fans will help to motivate players as they gear up for the game against Japan and prepare to leave the UK for the Tour – letting them know that the four nations are behind them, despite fans being unable to travel to South Africa this summer.

The imagery shows how the power of connectivity can bring players and fans together, which is more important than ever with no travelling fans.

Max Taylor, Consumer Director at Vodafone UK, said: “We are excited to be able to give Lions fans and players an opportunity to unite and connect ahead of the upcoming Tour. This is more important now than it has ever been. We hope these messages will show the players that even though British & Irish Lions fans can’t be there, they’re still very much cheering them on.”

Maro Itoje said: “Fans are such an important part of any sport and one of the biggest, if not the biggest, reason why most of us play. With no fans there is an evident missing piece. It’s incredible seeing how much support we have as a team and it is a huge boost for the whole squad as we head to South Africa.”

Hamish Watson said: “We’ve all missed having fans there with us – they really do have the power to inspire us. So being able to receive these incredible fan messages has been a great boost. It has spurred me and the team on even more to do them proud. We love to the see the messages so please keep the support coming while we are on tour.”

Louis Rees-Zammit said: “It’s been a tough year not being able to connect with fans physically. So, we are grateful for the power of technology and social media that has allowed us to stay connected and motivate us for this upcoming tour. This is my first Lions Tour and the support so far has been overwhelming.”

Maro Itoje: “Show them who you are” and “Blaze the trail young king”.

Hamish Watson: “Do Scotland Proud” and “A secret weapon”.

About British & Irish Lions
The British & Irish Lions are one of the most famous teams in the world of rugby. Every four years, the Lions – selected from the national sides of England, Wales, Scotland and Ireland – head to the southern hemisphere to do battle with rugby heavyweights New Zealand, Australia or South Africa.