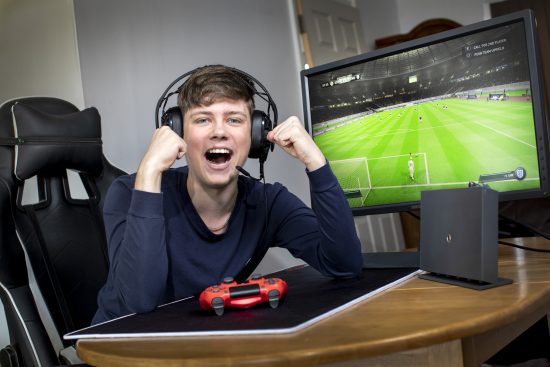 Stirling is on track to become a world leading Gigabit City providing a full fibre network to nearly every home and business by summer 2020. CityFibre has completed more than half of its build programme to install full fibre directly to households and business premises across the City of Stirling and Bridge of Allan.

More residents and local businesses than ever before will be able to benefit from a significantly superior internet experience through the use of Vodafone Gigafast Broadband. By using faster and more reliable fibre-optic cables, installed by CityFibre, at every stage of a connection instead of traditional telephone lines, Vodafone Gigafast Broadband gives users download speeds 20 times faster and upload speeds 150 times faster than the average fixed broadband service in the UK.

Customers can choose from three Vodafone Gigafast Broadband packages: 100, 500 or 900Mbps, with prices starting at £28 per month. At these speeds, the whole family can simultaneously stream their favourite film, play online games or upload videos and photos across multiple devices with no lag, buffering or dropout.

The Stirling Gigabit City project forms part of CityFibre’s £2.5bn Gigabit City investment programme to bring full fibre to five million homes and businesses by 2025. Stirling City Council is using CityFibre’s network to connect key public sites such as schools, libraries, and community venues. It will also serve as a backbone for the future deployment of 5G and a host of Internet of Things and Smart City applications.

The full fibre network rollout started in November 2018 and has now reached Cambusbarron, Broomridge, Bannockburn, Braehead, and Raploch. People living and working in Bridge of Allan, Riverside, Torbrex, and St Ninians are next in line to benefit from this new network and can register their interest for Vodafone Gigafast Broadband at www.vodafone.co.uk/gigafast

CityFibre has been working closely with Stirling Council to engage the local community and minimise disruption. CityFibre’s team have visited over 11,000 properties to provide information on the project and detailed conversations with nearly 5,000 residents about the benefits full fibre.

Bruce Crawford, Member of the Scottish Parliament for the Stirling Constituency, commented: “It’s great to see the progress that is being made across the city area, and I’m excited about what this means for my constituents. Already, people are connected to some of the fastest broadband speeds in the UK, which is excellent news for households here. I look forward to the next stages of this rollout, and to even more people getting connected to full fibre broadband.”

Councillor Scott Farmer, Leader of Stirling Council, said: “We are proud Stirling is well on its way to becoming the nation’s first completed Gigabit City project and believe it is the start of a huge digital opportunity for businesses and residents in the area. This forward-thinking approach and strategic partnership with CityFibre and Vodafone ensures we are securing the critical digital infrastructure we need today, as well as helping to safeguard the digital future of our residents and businesses.”

Neil Blagden, Director of Digital & Commercial Operations at Vodafone UK, added: “At speeds of up to 900 Mbps, Vodafone Gigafast Broadband is ideal for hi-tech businesses, connected classrooms and buffer-free households. It will boost the local economy and improve people’s lives. Every family member or employee can get online at the same time, with no delays. We look forward to bringing the service to more people across the city.”

Elaine Doherty, CityFibre’s City Manager for Stirling, said: “This is superb news for the residents and businesses of Stirling. People are enjoying greater reliability and speeds, while local businesses are being given the opportunity to use a world class network, providing them with a huge advantage against competing businesses both nationally and around the globe. We are exceptionally pleased with the progress so far and look forward to Stirling becoming our first completed Gigabit City next summer.”