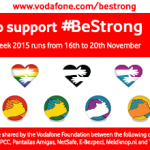 Snapchat, the mobile platform with over 100 million global daily active users, has partnered with Vodafone to help raise awareness of teen cyberbullying during the UK’s Anti-Bullying Week 2015.

The #BeStrong emojis were designed in response to an 11-country survey commissioned by Vodafone from YouGov*, where 72% of the teenagers surveyed said they would welcome an emoji they could share with friends being bullied online to show their support.

The #BeStrong emojis were developed in collaboration with anti-bullying ambassador Monica Lewinsky. Lewinsky, whose TED Talk about bullying has had more than six million views, first brought the idea for the #BeStrong emojis to Vodafone. Others who helped create the #BeStrong emojis include Berkeley University Professor Dacher Keltner – the psychologist who advised on the creation of the characters for Pixar film Inside Out, semioticians (who study signs and symbols and their use or interpretation) and anti-bullying NGOs including The Diana Award and ENABLE, a European Union project to help combat bullying.

Commenting in a video, Professor Keltner explained the importance of teens being able to offer support and show sympathy to their peers being cyberbullied. He said: “A lot of emojis can be limited for communicating emotions.  The bystander needs better tools.  Specific emojis that they can send their friends to show that they are there for them.”

The global cyberbullying study, one of the largest of its kind, revealed that more than half of teenagers said cyberbullying is worse than face-to-face bullying and 43 per cent believe it to be a bigger problem for young people than drug abuse. Additionally, 38 per cent said they did not tell their parents or guardians, as they felt ashamed (32%), scared their parents would get involved (40%), or worried what their parents might do (36%).

In addition, the Vodafone Foundation, Vodafone’s philanthropic arm, as part of its digital family programme, is also helping to raise funds for anti-bullying NGOs by donating £1(€1.40) for every Twitter retweet or public Facebook like of Vodafone’s image of the #BeStrong emojis* during Anti-Bullying Week in the UK.

Snapchat’s Director of Public Policy Micah Schaffer, said: “We’re proud to leverage our Geofilters product to help spread the BeStrong message with ‘Snapchatters’ across Europe. We hope that sharing this message can help ‘Snapchatters’ take a stand against bullying on our platform and beyond.”

Vodafone Foundation Director Andrew Dunnett, said: “The new generation that was born digital thrives in a world of constant connectivity, but there are clear risks for young people as well as benefits. Our research showed many teenagers find it difficult to help their friends when cyberbullying is happening, and the #BeStrong campaign has been created to help them convey emotional support.”

The initiative is a continuation of Vodafone’s commitment to helping children and their parents navigate through the social and digital world in a safe way. Vodafone UK recently released the fourth edition of its Digital Parenting magazine, developed in partnership with The Parent Zone, which is full of tips of how to help young people stay connected safely. Since its release in September, more than 500,000 copies of the magazine have been distributed to schools, NGO’s, government bodies, children’s charities and other outlets. Vodafone is also the headline sponsor of the upcoming National Theatre production, wonder.land, which highlights a range of issues relevant to many teenagers today, particularly the positive and negative impacts of the online world.