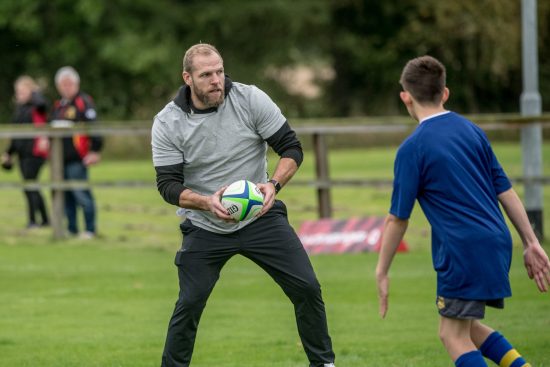 Fun-filled day of sport for the community, plus tech investment for the local club's future.

Dungannon RFC is one of four clubs – including Westbury RFC, Aberdare RFC and Bannockburn RFC – selected for the tour, an initiative dedicated to supporting grassroots rugby clubs in the UK and Ireland. Dungannon was chosen for its commitment to growth and championing women’s rugby.

Vodafone, as the lead partner for the 2021 British & Irish Lions Tour to South Africa, is visiting each club to host a fun-filled day of sport, including scheduled matches, pitch-side games and entertainment. The tour aims to raise awareness of the positive impact grassroots rugby has on the local community and help raise much-needed funds for the clubs, following the many challenges faced during the pandemic.

James Haskell at Westbury RFC, the previous and first stop on the Lions Legacy Tour.

Vodafone’s Lions Legacy programme will also provide technology solutions, including video camera equipment and MacBooks, to support training and matchday analysis, as well as the creation of social media content. Dungannon RFC will also receive a new till system to help it run more efficiently, plus other digital learning tools to help it become more financially sustainable.

On the day itself, a selection of Dungannon RFC members will be invited to attend digital workshops led by the team behind The Good, The Bad & The Rugby podcast. This will include a session with James Haskell on social media and another session on how to celebrate, market and commercialise the club’s 150 Year Anniversary (due to take place in 2023), led by businessman and sports presenter, Alex Payne.

Dungannon RFC’s first female Club Chairperson of Rugby, Cheryl Wilson said:“Our club is in the heart of the Dungannon community, which like to so many, has depleted following the global pandemic. The visit by Vodafone’s Lions Legacy Tour is exactly what our members need to feel re-energised and re-commited to our club’s future and will give us the knowledge and tools to make change happen. We’re so excited to welcome our guests to the club and bring the wider community back together again with something exciting”.

Vodafone Consumer Director, Max Taylor said:“We’re really pleased to be using our partnership with The British & Irish Lions to support the community clubs that spot, nurture and develop the Lions players of tomorrow. Our trip to Northern Ireland is a special one, as Dungannon RFC was once home to some of the nation’s greatest Lions players”.

James, Mike and Alex of The Good, The Bad & The Rugby podcast will take part in the day’s events to help raise awareness of the community spirit and importance of grassroots rugby. They will finish the day by hosting a live podcast recording of The Good, The Bad & The Rugby, inside the Dungannon RFC clubhouse, guest starring Tyrone Howe, Gill Bourke and Club Chairperson of Rugby, Cheryl Wilson.

To further support grassroots rugby, Vodafone is developing a resource for all community clubs across the UK and Ireland available through V-Hub, a website to help small businesses develop their digital capabilities following the Covid-19 pandemic. Available from Spring 2022, the toolkit will offer essential tips and guidance and help clubs develop new skills and expertise in digital marketing and social media.

Vodafone’s Lions Legacy Tour is free to attend from 9am on Saturday 27 November, with the live podcast followed by a live music act available to ticket holders only. For more information on the event please visit Dungannon RFC social media platforms including Instagram, Facebook and Twitter.

The British & Irish Lions are one of the most famous teams in the world of rugby. Every four year, the Lions – selected from the national sides of England, Wales, Scotland and Ireland – head to the southern hemisphere to do battle with rugby heavyweights New Zealand, Australia or South Africa.