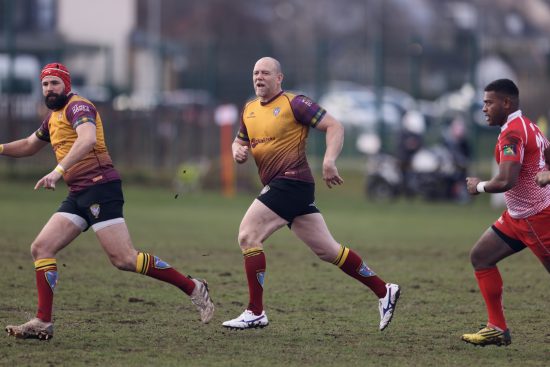 The latest stop on the Vodafone Lions Legacy Tour has helped raise vital funds for local rugby, while highlighting the role that the sport can play in helping veterans transition back into civilian life.

The Scotland legends were joined by The Good, The Bad & The Rugby’s James Haskell, Mike Tindall and Alex Payne and over 500 people from the local community for a day of pitchside fun and festivities, helping to raise £6,000 for the Stirling club. The donations, combined with new technology and digital learning opportunities provided by Vodafone, will help to secure the club’s financial stability following a difficult period during the COVID-19 pandemic.

The Bannockburn roadshow had a particular focus on veterans, celebrating the role rugby can have in helping them transition back into civilian life. Bannockburn’s Director of Rugby, Jimmy Samuel, is a veteran of nine overseas tours, including Bosnia, Afghanistan, Kosovo and Iraq, and is vocal about the positive impact community rugby has had on him since leaving the forces.

Mike Tindall played a full half for Bannockburn’s men’s team as they battled out a valiant defeat against the Scottish Army RFC, whilst their women’s team, the Valkryies, beat Clydebank Ladies 14-7. Tindall, Haskell and Payne also took on a number of military-themed challenges, including bagpiping, an assault course, and a quick kit change, with Payne named the victor by Samuel.

Vodafone Consumer Director, Max Taylor, said: “The enthusiasm and passion for the club has been evident this weekend. We’re thrilled that the skills and support offered by Vodafone can help Bannockburn grow and thrive in the future.”

Ian McEwan, Bannockburn RFC President, said: “It’s been an honour to host the latest stage of Vodafone’s Lions Legacy Tour. The funds raised will have a huge impact on the club and the equipment which will go a long way to supporting our recovery after a tricky period through the COVID-19 pandemic.”

The digital workshop sessions have allowed us to develop a number of important digital skills, and we’re looking forward to putting these into practice to raise awareness around the club, increase our supporter base and our attendance; and ultimately secure our long-term sustainability.”

The day finished with a live recording of The Good, The Bad & The Rugby, with Tommy Seymour and Lisa Martin. Discussion centred on the shared values between rugby and the military, and the importance of clubs like Bannockburn in supporting the community and benefitting both physical and mental health.

To further support grassroots rugby, Vodafone is developing a bespoke business resource for all community clubs across the UK and Ireland. The toolkit will be available via V-Hub, Vodafone’s platform for helping small businesses develop their digital capabilities as they get back on their feet following the Covid-19 pandemic. Launching in Spring 2022, it will offer essential tips and guidance to help clubs develop new skills and expertise within digital marketing, content strategies and social media amplification.