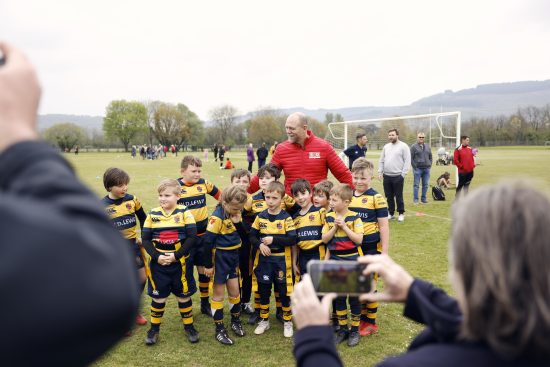 British & Irish Lion Wyn Jones joined a day of youth-focused rugby at Aberdare RFC, in support of Vodafone’s Lions Legacy Tour, helping the South Wales club to raise an impressive £10,000. Aberdare RFC is one of four clubs, including Westbury RFC, Dungannon RFC and Bannockburn RFC – taking part in the Vodafone initiative, dedicated to supporting grassroots rugby clubs in the UK and Ireland.

Wyn was joined by current Welsh Women’s captain, Ffion Lewis; Welsh U20s captain, Alex Mann; former Welsh international and current strength and conditioning coach, Huw Bennett – alongside The Good, The Bad & The Rugby’s Mike Tindall and Alex Payne, for a day of pitchside fun and festivities with the local community.

A highlight of the day included Alex Mann, Mike Tindall and Alex Payne leading warm-up and training sessions with a selection of young players from the club. The day was particularly special for Mann who was a mini and junior player at Aberdare RFC, joining the club as an under-eight and playing through to under-16s.

The funds, in combination with new technology and digital learning opportunities offered by Vodafone, will help the club run more efficiently and improve its financial stability following a difficult period during the COVID-19 pandemic. As part of the programme, the club also received a new electronic scoreboard, Veo sports camera and laptop.

A short history of the elite touring rugby team...
Find out more

The event finished with a live recording of The Good, The Bad & The Rugby, with a discussion centred on women and youth rugby in Wales.

Vodafone Consumer Director, Max Taylor, said: “We’re thrilled to see Aberdare RFC host such a fantastic event for the local community. The excitement felt over the last weekend has been immense and it is testament to the crucial role that grassroots clubs play in their local areas.

“We hope that the skills and support offered by Vodafone can inspire the club to build on its fantastic work, and go from strength to strength in the future.”

Ethan Williams, Aberdare RFC Senior Team Manager, said: “It’s been incredible to see such a wave of excitement across the club this weekend. The skills our team has gained, coupled with the incredible amount of money we have raised, will go a long way in helping us to continue our work developing youth rugby talent from the region.”

“We’d like to thank Vodafone for their commitment to the Lions Legacy Tour.”

To support grassroots rugby further, Vodafone is developing a bespoke business resource for all community clubs across the UK and Ireland. The toolkit will be available through V-Hub, Vodafone’s platform for helping small businesses develop their digital capabilities as they get back on their feet following the COVID-19 pandemic.

Vodafone’s Lions Legacy Tour has visited four clubs, Westbury RFC, Dungannon RFC, Bannockburn RFC and Aberdare RFC, to raise funds and help support grassroots rugby in the UK and Ireland. The Good, The Bad & The Rugby’s Alex Payne, James Haskell and Mike Tindall have joined thousands of residents for the event festivities. Previous highlights from the tour can be viewed here and here.

Working with Lions legends past and present, Vodafone used the latest connective technology to bring fans closer to the Tour than ever before. This included the creation of the Vodafone Digital Lions, allowing fans to become a Lion digitally and interact with their favourite players and events, as well as the world’s first 5G autograph, using Vodafone’s super low latency 5G network to reward Lions superfans in the UK with an autograph from their idols in South Africa, from 8,000 miles away.

The British & Irish Lions is an iconic team in the world of rugby. Every four years, the Lions – the best-of-the-best selected from England, Ireland, Scotland and Wales – travel to the southern hemisphere to take on Australia, New Zealand, or South Africa on landmark tours.

The Lions is the pinnacle of players’ careers, a once in a lifetime experience for fans and leaves an enduring legacy wherever the team visit.

The Lions foundations are strong, built upon 130 years of history and tradition with tours taking place regularly since 1888.