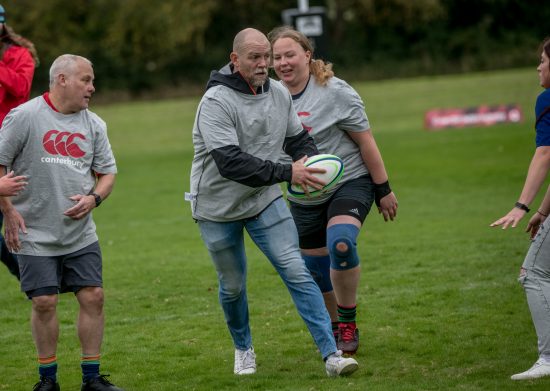 The professionals also took on the locals in a game of walking rugby, which saw one side stretch the definition of 'walking'!

More than 550 people from the local community attended the event, raising over £9,000 in total. These funds, along with technology equipment, digital tools and new team kit provided by Vodafone, will help the club run more efficiently and become financially sustainable.

The highlight of the afternoon saw Westbury RFC’s Walking Rugby Team take to the pitch for the first time, with former England players James Haskell and Mike Tindall both taking part in the inaugural game alongside their podcast co-host, Alex Payne.

Wearing new kit provided by British & Irish Lions principal partner, Canterbury, both sides started off hesitant as they got to grips with the rules. An early victory for Team Westbury in the first game stoked some competitive fires for Team GBR, who occasionally stretched the definition of ‘walking’ as they fought back to win the second game. The tournament ended in an amicable draw, with the Westbury locals proving they could walk the walk against England’s finest.

Dennis Dredge, a Westbury local who took part in both games, said: “I played the very first game for Westbury back in the 1980-81 season and picked up quite a few injuries over the years, so it’s just nice to get the body moving again. It’s so important to have something that everyone can get involved with, regardless of age or ability, and you can see with the amount of people that have turned up to support the club today that it’s going to be a good thing for the future.”

Westbury RFC volunteers also attended digital masterclasses on the day, each designed to improve digital skills and allow the club to build a stronger online presence, driving awareness and growing its supporter base to help maintain long-term sustainability.

Westbury resident and Club Chairman, Gareth ‘Foggy’ Vaughn was thrilled to see such a great turnout at Saturday’s event and is excited for the future of the club:

“It was fantastic to be involved in such an exciting and fun-packed day of events. I’ve been part of this club since I was a boy, so have seen a lot over the years but this day will truly go down in history for the Westbury RFC. Watching our members, players and local community get together for the first time in a long time was really special and truly felt like the start of a new beginning for us. We’re so grateful to be involved in Vodafone’s Lions Legacy Tour and look forward to putting our new tech and digital skillset to use,” said Foggy.

James, Mike and Alex concluded the day’s events by hosting a live podcast recording of The Good, The Bad and The Rugby inside the clubhouse, guest starring Jason Robinson, Emily Scarratt and Club Chairman, Gareth ‘Foggy’ Vaughan. Along with current rugby affairs, injuries and the day’s antics, the panel talked to the importance of grassroots rugby and how with a little bit of digital and business help, these clubs can take their leagues and initiatives to the next level.

Vodafone Consumer Director, Max Taylor said: “The positive impact that grassroots rugby can have on the local community is huge and after a challenging 18 months it was great to see the fantastic turnout at Westbury at the weekend. This was a great way to celebrate the return of grassroots rugby, and I hope the club members are inspired by what they saw and learned on the day – we want to help clubs get smart with digital tools so that they can raise their profile, bring in new fans, new players, and new revenues. We’re looking forward to the next stage of our tour and continuing our support of grassroots rugby.”

To further support grassroots rugby, Vodafone is developing a bespoke business resource for all community clubs across the UK and Ireland. The toolkit will be available via V-Hub, Vodafone’s platform for helping small businesses develop their digital capabilities as they get back on their feet following the Covid-19 pandemic. Launching in Spring 2022, the toolkit will offer essential tips and guidance to help clubs develop new skills and expertise within digital marketing, content strategies and social media amplification.

The Tour will visit three further community rugby clubs across the UK – Dungannon RFC, Aberdare RFC and Bannockburn RFC. The Tour aims to raise awareness of the positive impact grassroots rugby has on the local community, improve the club committees’ digital skills and raise much-needed funds for the clubs following the challenges faced during the pandemic.