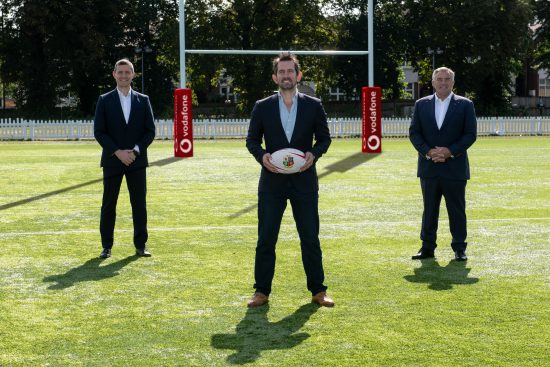 Vodafone has been revealed as Lead Partner of the British & Irish Lions for the 2021 Tour of South Africa. The two brands are united by a shared passion and commitment to connect people to each other and the things they love – in this case, the highly anticipated Lions Tour against the World Champions.

Like no other team in the world of sport, the Lions have a unique ability to unite fans from across the UK & Ireland behind one iconic squad.

The power of Vodafone’s network, now more than ever, unites and unlocks potential in us all, making the sponsorship the perfect pairing, bringing the UK and Ireland’s best mobile data network together with the best of the best in rugby.

As Lead Partner, Vodafone’s logo will be displayed on the front of the Lions’ shirt, making Vodafone an integral part of the ‘Sea of Red’ that will sweep every ground and city it travels to.

The sponsorship also includes the provision of communications equipment to keep everyone involved in the tour connected and technical support for training and player performance.

Whether fans are enjoying the Tour at home or away, thanks to Vodafone and the Lions, they will be able to immerse themselves in the action through a dedicated app, interactive games, and plenty of exclusive content. Vodafone will be creating innovative fan experiences through experiential activations both at home and in South Africa.

Max Taylor, Commercial Director, Vodafone UK said: “Nothing in sport unites us quite like the Lions. The team bonds nations that normally compete, unites families and friends and brings generations closer together.

“At a time when connection, unity and community are more important than ever, the Lions 2021 Tour gives us a great opportunity to bring people together in a way that no other sporting event can.

“The build up to this incredible touring event starts now. It’s time to unite the pride.”

Ben Calveley, Managing Director of the British & Irish Lions, added: “Today’s announcement represents two iconic brands coming together. Along with supporting Warren and the team, Vodafone will also help to enhance the experience of Lions supporters through the very best technology and innovation.

“The fans are a crucial aspect of any Lions tour and we will need to ensure they feel part of the team, to ignite their incredible support, if we are to overcome the World Champions.

“In Vodafone, we have found a partner who shares our passion for connectivity, and we are delighted to have them on board to enhance the experience of the Lions fans across the world.”

Warren Gatland, head coach for the British & Irish Lions, commented: “I am excited to welcome aboard Vodafone as team sponsor for the Tour next summer.

“The key to a successful Lions Tour is about players coming together quickly and staying united behind one common goal – to win a Test series against the World Champions in South Africa. I cannot think of a brand that knows more about bringing people together than Vodafone.

“I am sure they will play an important role in supporting the team on and off the pitch, as well as ensuring the Tour is a unique experience for all Lions supporters.”

The partnership is the most significant sponsorship Vodafone has embarked on in recent years and will be amplified through a multi-platform campaign using the hashtag #UniteThePride.

In May 2019, Vodafone UK announced a two-year partnership with Wasps rugby and Wasps Netball to bring to life the benefits of 5G technology. Trialled at a demo during the Wasps vs London Irish match in October 2019, Vodafone tech provided new camera angles and close-ups to get fans involved with the on-pitch play and give them “5Gamechanger seats” – the best seats in the house. Video from 360° cameras placed around the pitch – including in the players’ tunnel, dug-out and south stand – was streamed over 5G to give fans a real-time perspective on the game, getting them closer to the action than ever before.

In September 2019 Vodafone Ireland signed an extension agreement to be principal sponsor of the Irish Rugby team and communications partner to the Irish Rugby Football Union (IRFU) until 2024. The agreement also saw Vodafone become official sponsor of the IRFU Women’s Interprovincial Championship. The multi-year deal will see Vodafone and the IRFU work together to use both new and existing technology to create events, activations and content that will benefit all rugby fans and Vodafone customers in Ireland.

The British & Irish Lions are one of the most famous teams in the world of rugby. Every four year, the Lions – selected from the national sides of England, Wales, Scotland and Ireland – head to the southern hemisphere to do battle with rugby heavyweights New Zealand, Australia or South Africa.