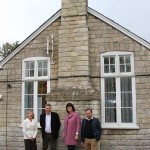 Vodafone UK has announced the beautiful rural community of Oare and Wilcot (Wiltshire) as the latest community in a rural mobile not-spot location to receive 3G coverage with Vodafone’s Rural Open Sure Signal (ROSS) programme.

Situated in the beautiful Wiltshire countryside, Oare and Wilcot have until now suffered from unreliable mobile coverage and slow network speeds.  The ROSS programme uses Vodafone’s innovative Sure Signal technology to bring high quality 3G voice services and much needed access to the internet via mobile devices to communities in some of the UK’s most beautiful and remote areas.  About the size of a cereal box, the Open Sure Signal units connect to existing broadband lines to create 3G coverage, and are installed high up on chimney breasts or the eaves of buildings.

Jorge Fernandes, Vodafone UK Chief Technology Officer, said: “I am delighted that Oare and Wilcot have joined our Rural Open Sure Signal programme. Mobile connectivity is an essential service for communities and businesses to thrive in today’s digital world and support local economies. As part of the Rural Open Sure Signal programme, we are committed to investing in our network to provide access even in remote locations where it is otherwise almost impossible to reach. The number of calls and data sessions the unit is supporting every day, in an area where there was marginal coverage previously, shows the significant benefit the technology is making to members of the community. I am excited to see the transformation for Oare and Wilcot, and other communities which have been successful for this pioneering programme.”

Claire Perry, MP for Devizes said: “Reliable mobile signals and fast internet speeds are as important to the local economy as fast roads and reliable railways and I am really pleased that Oare and Wilcot are now benefitting from improved mobile coverage with the Vodafone Rural Sure Signal Programme.  This is a fantastic example of local communities, councils and consumer organisations working together to deliver communications fit for the 21st Century.”

Chris Bartlett, Village champion for Wilcot commented: “Wilcot was this years’ winner of Wiltshire’s Best Kept Village award, and twice previously. Small, rural locations in conservation areas and Areas of Outstanding Natural Beauty can be very sensitive to any issues of planning and indeed to change. However, it’s also important that they are able to move forward and keep up with the times. Initiatives like Rural Open Sure Signal are a perfect demonstration of how these two things can be balanced.”

Deirdre Nix, Village champion for Oare commented: “The Sure signal has made a great deal of difference to reception at the North end of Oare village.  This is particularly important for the primary school since it helps parents who are waiting to collect children stay in touch with older children at secondary school.  Our residents on Vodafone are now able to use their phones in the house not just in the garden! And when Duke of Edinburgh participants and walkers visit our area they now have much better reception, great for people on a great day out in Wiltshire, but also good to know that we have a good coverage near the village for emergency contact. Thanks to Vodafone for improving our lives.”

As well as using Rural Open Sure Signal to plug rural “not-spots”, Vodafone is spending around £2 billion on its network and services across the country over 2014 and 2015.  This includes the provision of HD (High Definition) Voice technology on its 3G network and the extension of its 4G coverage to 661 cities and towns and thousands of smaller communities across the UK.