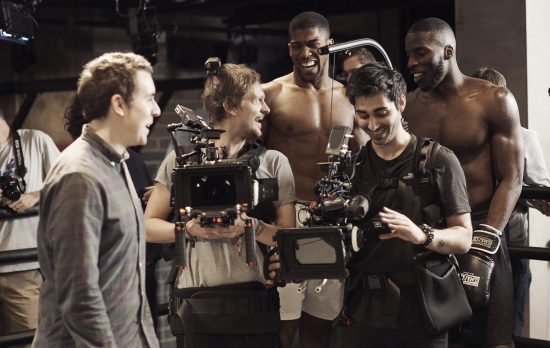 New VOXI Creators Series film features fellow Londoners sharing inspirations and discussing how the power of connections can influence the next generation.

The two Londoners feature in a new VOXI Creators Series film, sharing their personal journeys, the inspirations they have drawn upon in their careers and their experiences of growing up in the capital city.

The short film is the latest instalment in the Creators Series from VOXI – a new mobile offering created by and for people aged 25 and under, which provides them endless social data so they can stay connected.

VOXI works with over 100 talented young content creators, bringing the next generation of creative talent to a wider audience and providing them with a platform to showcase their talents and shape the VOXI brand identity.

IBF and WBA heavyweight world champion Anthony says: “Lawrence is a good representative of the sport. Being from London, we both have that London swagger, and we can connect – East London and North London, it’s all London.”

“We both have that attitude of no fear, just get on with it. And no matter where we end up it’s better than where we started.  We both connect on that level, because I respect and appreciate what he’s achieved.”

Okolie added: “AJ has influenced my career as both an amateur on the GB team and then when I became a professional.

I think there’s a lot of similarities in terms of our background.  I don’t think he had that much when growing up, and from the hard work we’re putting in we’re trying to go on to do better things in the future.”

The film was directed by 23-year-old filmmaker Aaron Dunleavy, from Blackburn, Lancs., a recent graduate of the University of Arts, London. His debut short film, Throw Me to the Dogs, was the winner of ten awards and has received praise from acclaimed British director Danny Boyle.

Aaron said: “I have a passion for working with young people from vulnerable and underprivileged backgrounds and inspiring them to explore new creative outlets. This closely fits with the message connections enabling endless possibilities that I wanted to showcase in this film.

“It was important for me to show AJ in a relatable way, and his story of humble beginnings is the perfect opportunity to inspire young people from all walks of life. It was great to work with Lawrence as well, as he really brought the message of endless possibilities to life – showcased by how his connection with AJ has provided the inspiration to follow in his footsteps.”

Dan Lambrou, Head of VOXI, added: “We want VOXI to be about enabling young consumers to pursue endless possibilities, as well as about celebrating exciting young creative talent.

“The collaboration between Anthony Joshua, Lawrence Okolie and Aaron Dunleavy is the perfect example of bringing together well-known brand ambassadors with new talent in the arts.  This showcases the power of connections.”

VOXI is a dedicated youth mobile offering created by Vodafone, for people aged 25 and under, that enables them to use their phones the way they want to. The VOXI brand, products, customer experience and marketing have all been co-created with this audience in mind. The VOXI SIM lets customers use selected social and chat apps as much as they like, without affecting data allowance. With unlimited calling and texting, the freedom to use your phone in Europe at no extra cost, no contract and no credit check, VOXI is accessible, flexible, affordable and transparent.