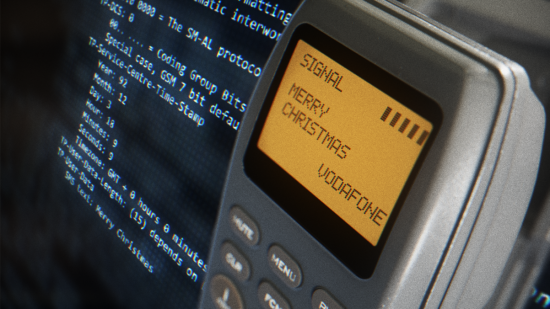 Proceeds from the auction will be go to UNHCR, the UN Refugee Agency, to support forcibly displaced people.

On 21 December 2021 Vodafone will auction an NFT of the world’s first ever SMS text message – which read ‘Merry Christmas’, and was sent on the Vodafone network in December 1992. Through the auction, Vodafone will be raising money for the UNHCR, the UN Refugee Agency.

Vodafone is combining a world-first innovation from nearly 30 years ago, with today’s state-of-the-art technology.

The exclusive NFT guarantees ownership of a unique, detailed replica of the original communication protocol of the first text message ever transmitted. The auction will be conducted in Paris on 21 December 2021 by Aguttes, the first independent auction house in France. Largely active in the international art and luxury market, it expects to gather bidders from all around the world for this sale.

Find out more and submit your bid on the auction site.

Auction house founder Maximilian Aguttes said: “The first printed book, the first phone call, the first email – all these inventions have changed our lives and communication in the world. This first text message received in 1992 is a historic testament to human and technological progress – we are delighted to be able to support the sale of this landmark piece of history for this cause.”

Vodafone will donate all proceeds from the auction to UNHCR, the UN Refugee Agency, to support the 82.4 million people who have been forced to flee their homes due to conflict and persecution.

Christian Schaake, Head of UNHCR’s Private Sector Partnerships Service, said: “Technology has always had the power to innovate and change the world. Through this combination of groundbreaking tech and movement for social good, UNHCR can continue helping refugees and people who’ve been forced from home, giving them an opportunity to transform their lives and build better futures for themselves, their loved ones and communities they’re living in.”

Ahmed Essam, CEO Vodafone UK, said: “We’re proud to be bringing together a major technology innovation from our past with cutting-edge technology of today, to help people in desperate need of support. This initiative embodies our ‘Together We Can’ spirit.”