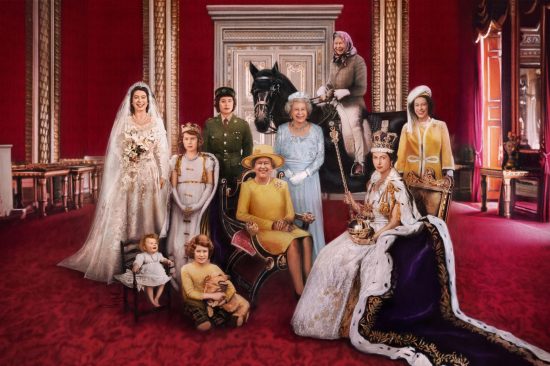 The photorealistic painting by Paul Shipper is based on historic moments throughout Her Majesty's life, celebrating her Platinum Jubilee.

In celebration of Her Majesty The Queen’s Platinum Jubilee, Vodafone has commissioned a digital portrait showcasing ten iconic moments of Her Majesty’s life. Designed in the style of a family portrait, it seamlessly edits together images of The Queen at key moments of her life and reign.

The portrait, created by award-winning Manchester-born artist and illustrator Paul Shipper, was created using a photorealistic digital painting technique. It features key moments in time to honour Her Majesty The Queen’s 70 years of service. Highlights captured in the painting include Princess Elizabeth at the age of one in 1927, Her Majesty’s royal visit to Jamaica in 2002, the Coronation in London on 2 June 1953, and Her Majesty’s visit to Sydney in 1970 – when she bucked centuries of royal tradition by choosing to greet the crowds in person, rather than waving at them from a protected distance.

The digital artwork, which Paul created over a five-month period, closely resembles the strokes and techniques of a real-life painting. The artwork appears to be a photo portrait at first glance. When looking closely though, the depth and painterly textures reveal the level of craft and detail.

From his traditional art background of pencil and airbrush, he was able to master this technique in the digital realm giving his work the desired aesthetic with a modern appeal. Paul was inspired from a young age by the illustrated one sheet film posters in cinema lobbies. Having now worked on Hollywood film posters and advertising campaigns, Paul has honed his craft and become one of the most prolific illustrators in recent history.

Maria Koutsoudakis, Head of Brand at Vodafone UK, said: “As a British company, we wanted to honor Her Majesty The Queen and celebrate some of the many iconic moments of her long reign. Thanks to digital technology, we have been able to commission this portrait and celebrate ten of the most significant moments from her 70 years of service, in a way that photography and retouching simply cannot.”

Paul Shipper, award winning illustrator, said: “In honour of Her Majesty The Queen’s Platinum Jubilee, we wanted to create a portrait that somehow encompassed the life of The Queen in one image. A take on a traditional Royal Family portrait but with a twist; Her Majesty would be the sole subject of the group portrait from selected key moments of her life.”

“I love technology – it has always thrilled and interested me. I grew up using pencils and paints, so as time progressed I tried to keep up with the latest tools available. It is always a fun challenge to see how I can use digital tools to make a piece of art. That said, I never want my work to look digitally made, but to look and feel like it had the touch of the hand, heart, and spirit, like real-life paintings.”

The digital portrait will be displayed in selected Vodafone UK stores from 2 June 2022 to 8 June 2022.

The ten moments showcased in the portrait are (from left to right, as numbered below): 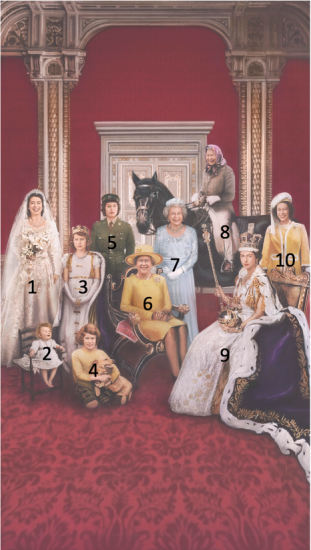 Paul Shipper is a freelance illustrator best known for producing key art and imagery for film, entertainment and advertising. Born in Manchester, his formal education ended in 1997 with a BA in illustration and animation from Manchester Metropolitan University. Paul has gone on to create illustrative key art for movie posters, home entertainment, books, comics, magazines, events and licensing work for clients such as Amazon, CBS, Disney, Foo Fighters, ITV, Lucasfilm, Marvel, Muse, Netflix, Nike, Penguin Books, Sky TV, Universal and Warner Bros. Paul has been publicly recognised for his work and awarded a prestigious Key Art Award in 2014 and an LCS Award for excellence in Illustration in 2015. In 2017, he became an honorary member of the 501st Legion and UK Garrison in recognition of his contribution to Star Wars through his art. In 2019 Paul became the first living Illustrator to be featured in ‘Illustration Magazine’ issue #66. In 2020 he became the first artist to create cover art for Empire Magazine’s newsstand issue and was also appointed as one of the very first Visual Contributing Editors of Empire Magazine that same year. For more information please visit: https://paulshipperstudio.com/

How Vodafone's franchisees relish 'being the boss'

Vodafone welcomes customers safely back to the high street