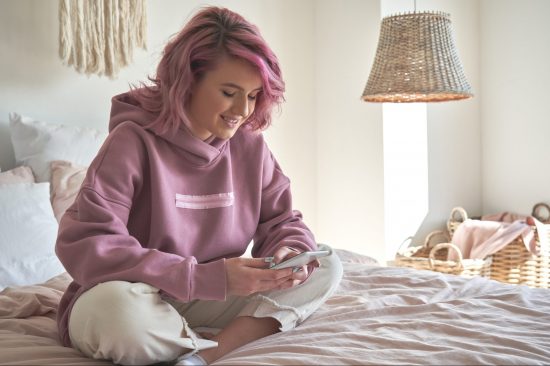 VOXI, by Vodafone, today reveals research that shows 16-24 year olds’ appetite for streaming online content isn’t always just for entertainment. The new research shows an insatiable thirst for knowledge and self-improvement, with 7 out of 10 16-24 year olds looking to learn something from video content, in comparison to just 1 in 5 streaming solely for entertainment.

With 83% of 16-24 year olds streaming video content on their phones, the research is launched to celebrate VOXI’s new ‘Endless Video’ plans which let people stream as much as they like from Netflix, Amazon Prime Video, YouTube, My5, TVPlayer and UKTV Play without using their data allowance.

The research, conducted after  lockdown, shows this generation not only using their screen time to stay entertained and connected, but also to make a positive change to their future. A third of people surveyed said they had made money from a new skill they’d learnt from online video content they’d watched during lockdown, a quarter started a new career and over half (56%) have positively changed their actions.

Two thirds (66%) say they now have a more versatile skill-set and over half (58%) feel more confident when facing the current cultural and economic environment, thanks to the factual entertainment they have streamed online. Over half (58%) of 16-24 year olds now believe that online video content is a more effective way of learning than traditional methods (seminars, lectures, textbooks), showing a trend towards ‘self-service’ education.

Given their appetite for knowledge, it’s not surprising that over half (60%) believe they are more clued up on current world affairs than their families and when big societal conversations arise, online video is one of the first places this generation turn to learn more about current issues.

Over half (63%) admitted turning to video content to learn more about the LGBTQ community, three quarters (74%) have increased their knowledge about ‘Black Live Matter’ and two thirds (62%) know more about the #MeToo movement.

This ‘on demand’ style of self-service learning is allowing this generation to take education into their own hands ensuring they’re learning and creating passion points at the same time, with the top 10 subjects currently streamed as:

“We launched VOXI’s new ‘Endless Video’ plans knowing that streaming content was important to Gen Z. I’m also not surprised to see that given Gen Z is known for their entrepreneurialism and thirst for knowledge, that entertainment has taken a backseat over educational content series – helping to support career development, their understanding of the wider world or empower them to positively change their actions.

“This trend has only been fuelled during lockdown, as ‘traditional ways’ of learning stopped and we saw a number of major societal changes come to the fore.”

With Netflix (87%) and Amazon Prime (55%) taking the crown of some of the top video platforms used by Gen Z, the new service from VOXI means anyone can learn new facts from documentaries, enjoy the latest blockbuster films and catch up on that TV show everyone is talking about, without worrying about running out of data.

New Endless Video plans are available to buy both online and in Vodafone stores and include:

Subscriptions to video services not included and 5G subject to coverage. For Endless Social and Endless Video some general purpose data is required.

VOXI has been awarded Best Pay as You Go network by uSwitch. For further information, please visit https://www.voxi.co.uk/.

About VOXI
VOXI by Vodafone, the mobile network for young people, offers plans that let you use selected social apps and websites as much as you like, without eating into your general data allowance. These apps are Facebook & Facebook Messenger, Instagram, WhatsApp, Pinterest, Snapchat and Twitter. Customers also have unlimited calls and texts along with free roaming in 48 European destinations at no extra cost. VOXI SIM-only plans work on a flexible monthly subscription with no contract; you’re free to change, pause or cancel your plan whenever you like.

Retiring 3G in 2023 is key to improving customers' connections