WHO NEEDS GAS WHEN YOU HAVE BROADBAND? ONE IN FIVE BRITS WOULD RATHER GO WITHOUT GAS OR ELECTRICITY THAN BROADBAND 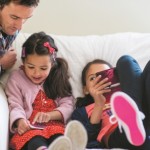 New statistics released today reveal new homeowners in Britain see setting up their broadband service as a bigger priority than their gas or water supply.

The research from Vodafone found one in five Brits (20 per cent) rank broadband as their top priority utility to organise when moving into a new house, with broadband also proving the second highest priority overall, beating water into 3rd place with just 13 per cent of votes (1).

71 per cent of the nation’s home owners admitted they would always consider the broadband service in an area before buying a home, and poor service would put them off going through with it. In fact, nearly a third of Brits (67 percent) revealed they have rejected buying a house due to poor broadband service.

The top five priority utilities for new homeowners are:

Almost 1 in 4 people in the UK under 25 (24 per cent) said that ensuring they have fast running, smooth broadband was more important than organising council tax or parking permits. Broadband cutting out proved to be one of the most frustrating home situations for under 25’s in the UK with 24 per cent placing it as the situation which caused them the most stress, above issues such as their car not starting, or their kitchen sink being blocked.

“Today, fast and efficient broadband at home is more of a priority than ever and this is demonstrated by the importance that people put on their internet when they first move in to their new homes,” said Glafkos Persianis, Vodafone UK’s Commercial Director.

“Vodafone’s fast and reliable broadband service and its innovative features help our customers easily solve their everyday issues, such as not being able to reach that awkward room on the other side of the house or having a strong enough connection to stream tracks from their wireless garden speakers.”

Vodafone’s new innovative broadband features ‘Boost and Beam’ ensure a seamless experience for customers. Boost allows users to enhance their connection to one device in the house for a selected amount of time, a useful tool for downloading a favourite TV show or album in a hurry. Beam allows customers to focus a signal to anywhere in the house, even to the tablet at the bottom of the garden or the attic bedroom which previously never got Wi-Fi.

Research carried out by independent survey company FlyResearch, who polled 2,000 Brits over the age of 18 during March 2016