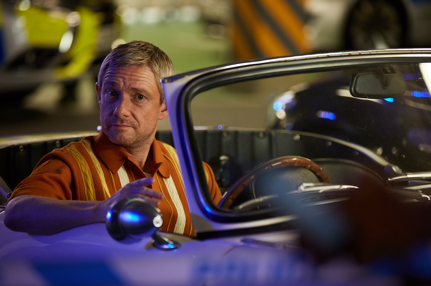 A far cry from a wedding in sunny Spain, this time Freeman finds himself in a car park, where Vodafone’s most reliable network ever is called upon to save the day.

The TV spot – named ‘The Chase’, highlights Vodafone’s continued pledge to connect customers throughout the world, brought to life through a comical take on Freeman’s unfortunate encounter with a small-time gangster set-up.

Returning from his weekly grocery shop, Freeman wanders into the carpark to discover he is at the center of a hold-up alongside two suspect looking men. No stranger to throwing humour at a situation, Freeman playfully attempts to interact with the duo, but to no avail. Having watched the situation unfold, a woman nearby loading her car with groceries dials 999. Thanks to Vodafone’s outstanding indoor coverage, the small-time culprits’ heist is short-lived.

Since 2014, Vodafone has invested more than £2 billion into the network and services and is now able to say it provides outstanding indoor coverage and even better outdoor service on its most reliable network ever.  As part of this, Vodafone has reallocated a fundamental resource – spectrum – and deployed new innovations to make more efficient use of the cell sites and continues to improve voice call technology.

The integrated campaign launches this Tuesday at 7:15 PM on ITV during Emmerdale, and will feature ATL, social, radio, press & digital executions. The advert will be available to watch online via Vodafone’s YouTube Channel, here: https://youtu.be/LAtMdoCRo8E

For our second campaign with Martin Freeman we wanted to demonstrate just how much our customers can absolutely rely on Vodafone, especially when it matters the most. We are so proud to offer our most reliable network ever which we continue improve performance on everyday alongside an iron-clad Network Satisfaction Guarantee.  We are delighted that Martin has yet again been able to bring these benefits to life in a light hearted and humorous manner.