41% of LGBT+ people go ‘back in the closet’ in first job, independent multi-industry study across 15 countries finds 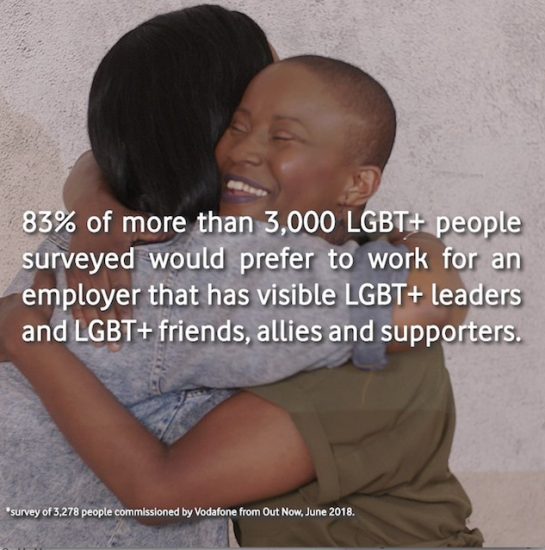 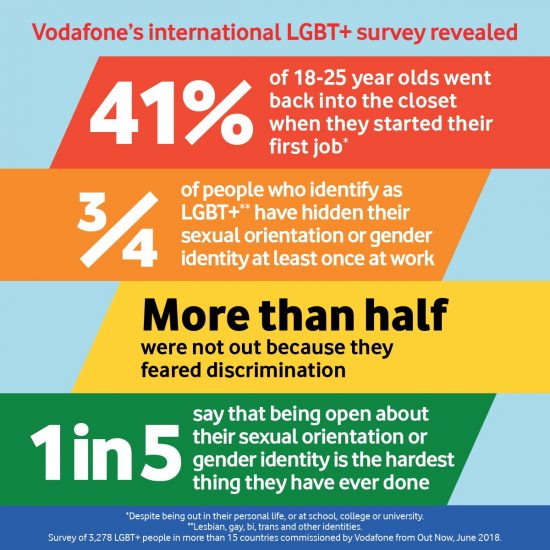 More than half (58%) of young LGBT+ people are not open about their sexual orientation or gender identity at work because they worry they will face discrimination from managers and colleagues, with 1 in 3 (31%) LGBT+ people admitting they went ‘back into the closet’ when they started their first job. This figure rises to 41% among 18-25 year olds.

New international research – commissioned by Vodafone from research firm Out Now – surveyed more than 3,000[1] LGBT+ young people across 15 countries and multiple industries, and found that the reasons young LGBT+ people feel unable to be out or open at work include: worrying that colleagues will react negatively (60%); fearing their career prospects will be worse (42%); and feeling they will be less likely to get promoted (33%). Many of those surveyed said that not being open about their LGBT+ status had negative repercussions, with nearly one third (28%) saying they had been less productive at work as a result.

This extensive research, along with insights gathered from current LGBT+ employees at Vodafone, has informed a new multi-country programme at Vodafone ‘LGBT+ and Friends Connect’, which is aimed at hiring and supporting LGBT+ people in their first jobs and providing training for managers.

Other findings from the research included:

To help create a culture where employees can be open about their sexual orientation and gender identity, Vodafone is launching:

“I am saddened that so many young LGBT+ people feel they still have to hide their status in the workplace. We are committed to creating a culture at Vodafone that embraces everyone for who they are, inclusive of sexual orientation and gender identity.

“Training for employees at all levels and visible signs of support through programmes like ours can make a real difference, and help to attract and retain a talented, diverse and productive workforce. The programme offers specific support for people starting their first job, which our research shows can be a particularly challenging experience for young LGBT+ people. We are also encouraging all employees to educate themselves and support LGBT+ colleagues to help create a truly inclusive workplace.”

Vodafone has a zero tolerance stance on homophobic, biphobic and transphobic discrimination, and works closely with leading diversity and inclusion NGOs on the development of materials and programmes for each of its local and international initiatives.

Vodafone calls on global brands to 'Change the Face' of tech

Vodafone in support for Channel 4 ‘Black to Front’ TV project