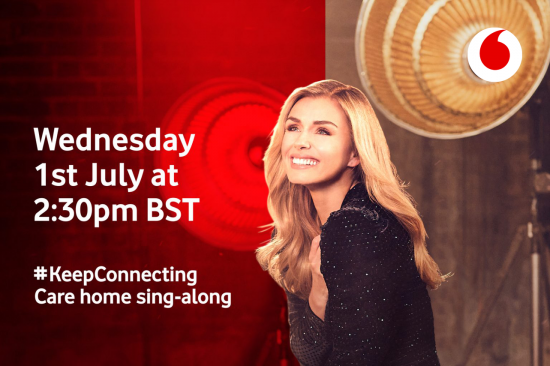 Katherine Jenkins OBE, to give a one-off live-streamed performance for care home residents, their families and staff.

25 June 2020:  Vodafone has teamed up with multi-award winning mezzo soprano Katherine Jenkins OBE to put on a one-off, live sing-along for care home residents, their families and staff. The event, hosted virtually by TV presenter Angellica Bell via a live broadcast streamed directly from Katherine’s home, will be broadcast into care homes across the UK and is available for anyone to watch on Facebook Live on Vodafone UK’s Facebook page.

The sing-along is designed to boost morale and connect people through music and technology.  Singing is proven to help promote a sense of community, improve wellbeing and increase positive moods.

Abiding by the current social distancing regulations in UK care homes, the sing-along will be enjoyed by residents and staff viewing together in communal areas of care homes, while families and people at home can join via Facebook.

Hundreds from Anchor Hanover and CHD Living care homes will take part, singing along to classic hits A Nightingale Sang in Berkeley Square, Vera Lynn’s We’ll Meet Again, You’ll Never Walk Alone, Here’s To The Heroes and You Are My Sunshine, a special birthday request from a resident, Audrey Grogan, at Anchor’s Blackbrook House in Colchester, who is celebrating her 109th birthday this month.

As part of a broader programme of activity focused on supporting older people in the UK, Vodafone will also next week launch its new Tech Team service. ‘How To’ You Tube videos, simple cut-out-and-keep guides as well as a soon-to-launch in-home support service for customers who aren’t able to come in store, are among the new ways Vodafone is helping older generations stay connected.

A dedicated online webchat service featuring a personal, one-way video chat function for customers, so they can see and speak to a Tech Team member is also now available via the Vodafone website.  Vodafone customers who want face-to-face advice on their account or devices can also speak to the Tech Team in our stores.

Over the past couple of months, while home schooling her children, Katherine has brought some much needed light to a global audience, performing every Saturday night live online. The successful at-home concerts have amassed more than three million streams and raised more than £5,000, for the NHS Charities COVID-19 Urgent Appeal, and will continue for the duration of the lockdown.

Katherine also recently joined forces with the late Dame Vera Lynn to release a duet of We’ll Meet Again, which went on to top the iTunes chart when released. 100% of Katherine Jenkins’ and Decca Records’ proceeds from the single were donated to NHS Charities Together to support the incredible NHS staff and volunteers caring for COVID-19 patients.

On 8 May, Katherine led tributes to commemorate VE Day 75, and made history by becoming the first person to perform to an empty Royal Albert Hall. The half-hour concert was streamed to audiences around the world via YouTube. The concert to date has raised more than £30,000 for SSAFA and £25,000 for The Royal Albert Hall. The concert brought a message of hope and togetherness, with a virtual duet of We’ll Meet Again with Dame Vera Lynn – a message that has resonated around the nation as people are again separated from their loved ones at a time of crisis.

As one of the UK’s greatest musical exports, Katherine has performed all over the world, for the Pope, for Presidents, and is a favourite of the Royal Family, having been invited to sing God Save The Queen at Her Majesty’s Diamond Jubilee, perform at Her Majesty’s Coronation Concerts at Buckingham Palace, and, by special request, at Her Majesty’s 90th birthday celebrations at Windsor Castle.

She has embarked upon numerous sold-out tours and duetted with such names as Andrea Bocelli, José Carreras, Dame Kiri Te Kanawa, Bryn Terfel, Rolando Villazon, and Il Divo, amongst others.

Katherine was awarded an OBE at the 2014 New Year Honours List for her services to music and charity and wowed audiences and critics alike with her stellar performance as Julie Jordan in Lonny Price’s semi-staged production of Carousel at the London Coliseum in 2017.

Anchor Hanover is England’s largest not-for-profit provider of care and housing for people in later life, with more than 60,000 customers in 54,000 homes across almost 1,700 locations, supported by more than 10,000 colleagues. Anchor Hanover provides retirement housing to rent and to buy, retirement villages and residential care homes, including specialist dementia care, operating in more than 90% of local councils in England.

CHD Living is an award-winning, family-owned and operated group of care facilities, with more than 35 years’ experience of providing the best quality care to its communities. With 13 residences throughout Surrey, CHD Living also operates two specialist rehabilitation centres and a domiciliary care business, Longdene Homecare. Each home is designed with its residents in mind, ensuring the group can continue to promote choice, independence and dignity, in safe and caring environments.

Vodafone pledges 24 million GB of data to the National Databank